“Beyond Sustainability” Travel to Omereque

Editor’s Note: This is a guest post by Lindsay Emi. Lindsay is a writer and student from Los Angeles, California. She is eighteen years old and a volunteer from Princeton University’s Bridge Year Program in Bolivia. She will spend six months in Cochabamba volunteering with Mano a Mano, and then attend Princeton beginning in the fall of 2017, where she hopes to study English and creative writing.

Below are Lindsay’s previous posts:

I was very excited to travel with a number of Mano a Mano USA volunteers for the one-week 2017 “Beyond Sustainability” trip at the end of March. Led by Mano a Mano co-founder Segundo Velasquez, the participants on the trip had the opportunity to see and learn about several different programs and projects of Mano a Mano, directly “on the ground.” Locally, we visited Mano a Mano’s Cochabamba offices, the airplane hangar, and the Center for Ecological Agriculture (CEA), but one of the most fun parts of the trip was going directly to the municipality of Omereque to visit some communities and see what they were doing with their completed Mano a Mano projects.

This was my third or fourth time in the municipality, but I liked how, rather than rush to conduct in-community workshops or check on water tanks and atajados, we were able to take a fairly busy but leisurely tour around Omereque and several project sites. Within just two days, we’d viewed several thriving infrastructure projects, including a health clinic in Tipa Tipa, a school in the town of Omereque, various atajados that are now full after a late rainy season, a road, and an extremely long footbridge constructed in collaboration with Bridges to Prosperity. 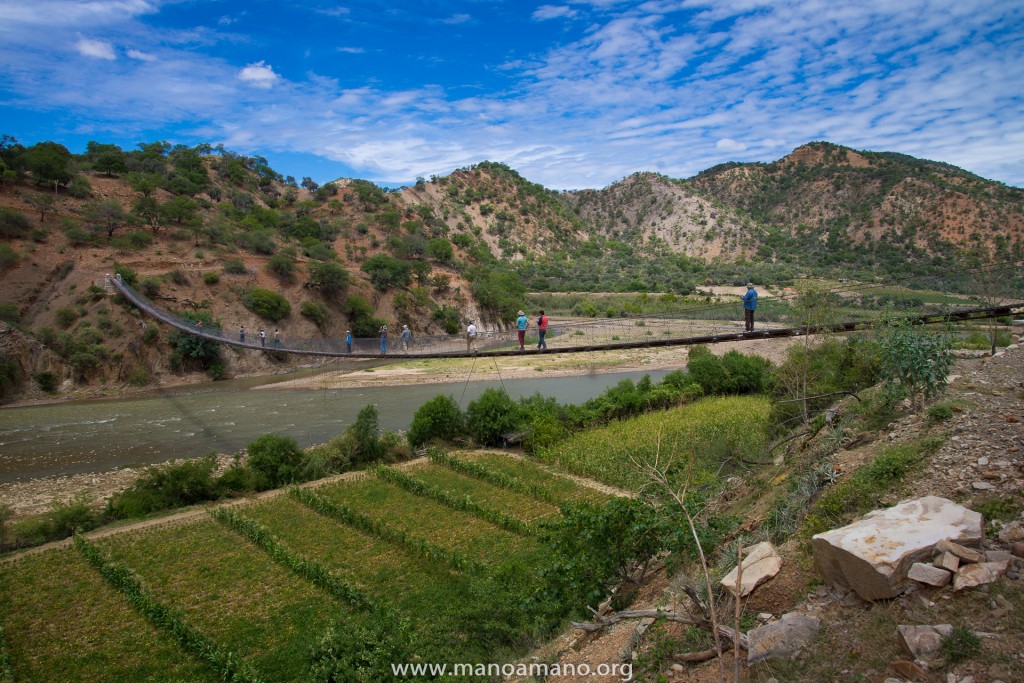 The foot bridge in Chari Chari.

However, the most special and moving parts of the trip were getting to interact directly with the people whom these projects affect and help the most. True to the “Beyond Sustainability” theme of this trip, our group and I saw firsthand how Mano a Mano’s beneficiaries were advancing their projects and using them to help those in their communities—truly not just maintaining or sustaining the infrastructure, but multiplying and growing the actual impact of the infrastructure with thoughtful, innovative care and use. We had the chance to meet nurses, doctors, students, younger children, farmers, council women, and the mayor of the municipality, Héctor Arce.

Hector Arce (blue shirt) in one of the many meetings with Mano a Mano over the past decade. This meeting was in 2011, regarding the possibility of building the footbridge that has since been completed (Bridges to Prosperity representative Netta is on the right).

Mayor Arce personally accompanied us as we traveled around the municipality to visit the infrastructure. We’d brought along several large boxes of medical supplies and school supplies to distribute to the clinics and school we’d visited, and the doctors and school’s principal were visibly thrilled and moved to receive such necessary supplies, including specialized equipment to manage diabetes, more crutches and wheelchairs, and a first aid kit for the school.

Mano a Mano staff and volunteers at the Tipa Tipa clinic, March 2017.

Dropping off donated supplies with the attending doctor at the Tipa Tipa clinic – a wheelchair, crutches, canes, and miscellaneous medical supplies. She was particularly excited about the new stethoscope which we had her check out on Karen, and the blood glucose monitor, which were exactly what she had been praying for.

On our first night in Omereque, we were received with a celebratory welcome dinner and dedication in the community of La Mesada to recognize the construction of eighty new atajados in the municipality. Arce and several community members delivered speeches thanking Mano a Mano and all of its staff and volunteers for their critical support in supporting or constructing the projects. We spent the rest of the evening eating together with members from several various nearby communities, watching performances by schoolchildren, and receiving watermelons, squash, and all kinds of other vegetables as gifts from the communities. Several children also braided my hair, roped me into games of duck duck goose and Sharks and Minnows, and taught me some dances.

Meeting with Farmers in Kainal

We met with farmers from the community of Kaiñal on the next day, who were benefiting from a road that Mano a Mano had constructed. This road enabled them to transport and sell their produce in larger markets. Because we were delayed by a second ceremony that the mayor held to officially recognize Mano a Mano and its staff and volunteers, we’d unfortunately arrived to our scheduled meeting about two hours late—but the community waited for us, received us with joy, and gave us another enormous gift of the vegetables they’d grown themselves, including an entire crate of tomatoes, bell peppers, and even some sugarcane grown by the river. We offered to pay or take much less than what they’d offered, but they completely refused, calling it a gesture of care and gratitude for what Mano a Mano had done for them.

Dedication brochure for a Mano a Mano road project in Kainal.

Dedication brochure for a Mano a Mano road project in Kainal.

Mano a Mano is Making a Difference in Omereque

Every person we met spoke passionately about how much the institution had done, how Mano a Mano has always been reliable in providing much needed support for the communities, and that the projects—from the health clinics to the atajados to the larger infrastructure projects like roads and bridges—were filling needs and effectively serving so many people and communities.

Before clinics like the one in Tipa Tipa were built in the municipality, people would have to travel for hours to larger towns like Aiquile to receive treatment; now, the health clinics in the area are known for providing such quality care that many community members come specifically to Mano a Mano health clinics for their health care, even over their local clinics in their communities. We were told that before the bridge was constructed, people who were taking their children to school or trying to transport goods into town would have to go directly into the water and struggle across the river on foot.

Crossing the river before the bridge was built.

The mayor told us that the drought in Omereque has been so extreme, it was having atajados and at least some stored water that saved their crops and production this year.

I know that the staff, the group of volunteers, and I were extremely impressed with how the communities have utilized and maintained their projects, and seeing so many beneficiaries and working projects inspired all of us to continue our work at Mano a Mano with renewed excitement.