My First Week at the CEA – Lindsay Emi

My First Week at the CEA – Lindsay Emi

Hello! My name is Lindsay. I’m eighteen years old and a student from Los Angeles, California. I’m currently taking a gap year with Princeton University’s 2016-2017 Bridge Year Program, a year-long service-learning program that sends thirty-five students abroad to one of five different countries before beginning freshman year at Princeton. I’m thrilled to be a part of Bridge Year in Bolivia, and to be volunteering with Mano a Mano for the next six months. At Mano a Mano, I spend two days a week in the Cochabamba office doing administrative work, and the other three days in Sacaba, working at Mano a Mano’s Center for Ecological Agriculture (CEA).

At CEA, I assist Mano a Mano agronomists Camila and Víctor with various farm maintenance tasks—watering plants in the greenhouses, weeding crops, shoveling manure in the animal pens, cutting alfalfa with a scythe, and tending to the compost piles, among many other different tasks. As part of my work, I’ll also be writing weekly updates for the blog on the various events and ongoing activities at CEA. 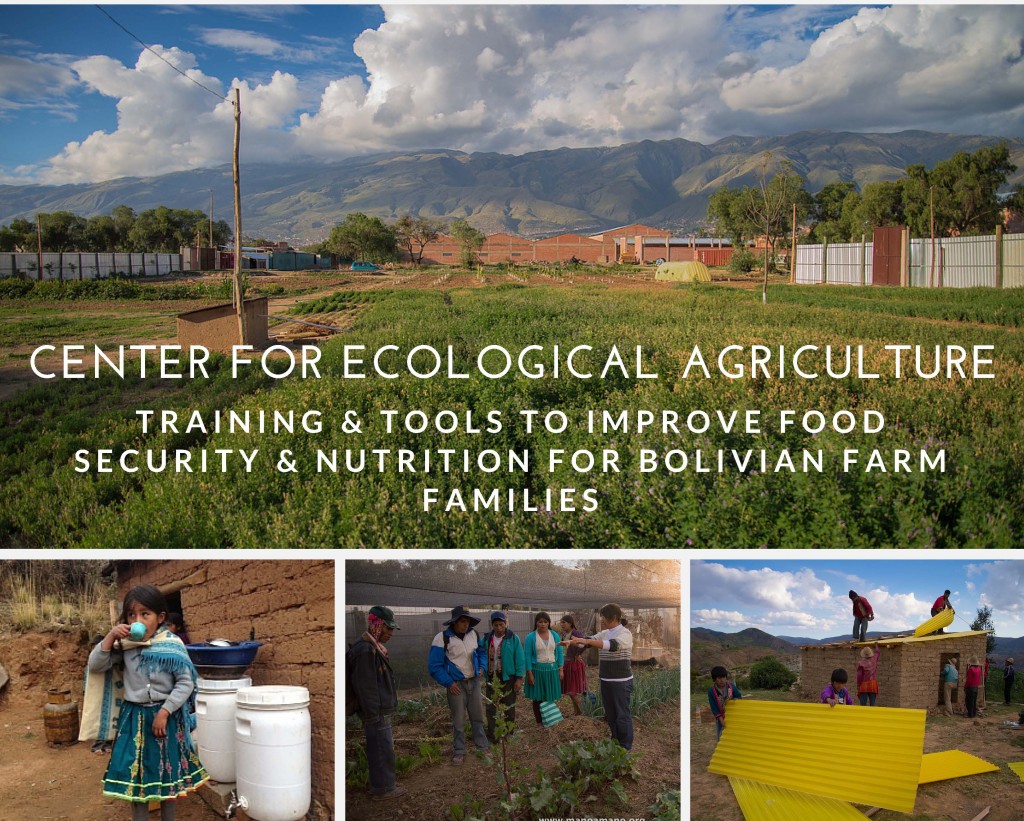 In this past year, CEA has faced several challenges, continuing to operate in its traditional capacity as a demonstration site and training ground for rural farmers and school-aged youth while in the midst of Bolivia’s worst drought in twenty-five years. Just this week, the drought prompted Bolivian President Evo Morales to declare a national state of emergency. People in urban and rural areas alike have been severely affected by the drought and water shortages. In cities La Paz and El Alto, for example, water has been strictly rationed and shut off in homes and businesses for up to sixty-hour periods; meanwhile, in rural areas of the country, the drought has threatened an estimated 290,000 hectares (716,605 acres) of agricultural land and 360,000 heads of cattle.

With its contentious history of issues around water and water access, Cochabamba and its surrounding areas have suffered as well. My fellow Bridge Year students and I live in Tiquipaya, just outside of Cochabamba, with homestay families; in these past weeks of November, water access in our homes and in our school has been cut to a couple of days a week, for half-day stretches at a time. Locally, just a few miles from CEA, several days’ worth of blockades of roads and major highways recently took place in Sacaba over the forced closing of critical points of access to water, including two of the town’s primary reservoirs. Three mornings a week, I take a bus into Sacaba to get to the CEA. This particular Thursday, the highway Villazon was clogged with a long line of stopped semi-trucks, and the bus I was on abruptly pulled to the side of the road—“No hay paso, no hay paso,” the driver explained to us. With very little idea of what was going on, I was shuffled off the bus with the other passengers. The entire highway, both sides, was occupied with hundreds and hundreds of people, most walking back towards Cochabamba, some throwing branches and tires into the road, all countered by dozens of police. I walked forward, intending to carefully skirt around the biggest part of the blockade. The other side of the highway suddenly filled with smoke and noises like gunshots, and people were screaming and running the other way—I ran with them. Qué está pasando? I shouted, while running, to a group of people who were also running and throwing rocks into the street. One of the men answered me, the police are breaking up the blockade, they’re throwing gas at us—I quickly asked him, why are there blockades?—and I didn’t hear his full answer as we sprinted down the side of the highway but could make out the phrase falta de agua. Less than ten minutes later, the highway cleared. I caught another bus.

In large part as a response to these drastic and worsening drought conditions in Bolivia, the CEA is undergoing a change in vision over the next year, with the goal of ultimately becoming a community center. For four years, since its founding and creation in 2012, the CEA has operated extremely successfully as a demonstration and training center. With the tremendous efforts of Mano a Mano staff, workers, and volunteers, it has evolved from an empty plot of dry, compacted land to a beautiful and fully functional space that houses over a dozen different working models of sustainable, low-cost agricultural practices, hosts several hundreds of visitors every year including farmers, students, volunteers, and government officials, and serves as a site to receive, organize, and distribute the thousands of pounds of donated medical and school supplies from the US.

Building on its current work, the CEA is now expanding its reach to educate any visitors and community members of all ages and occupations about topics involving sustainability, permaculture, food security, and economically viable ways to alleviate community issues of land and water use. We also plan to build new facilities and resources at CEA for the community, such as a recycled playground, a library with literature on agricultural and ecological topics, and a computer lab; these new facilities and attractions will transform CEA into more of a recreational, communal space, adding to its current educational and agricultural capacities. I’m excited to be documenting this project during the next six months, as the CEA begins to develop into a place that will benefit even more of the community. 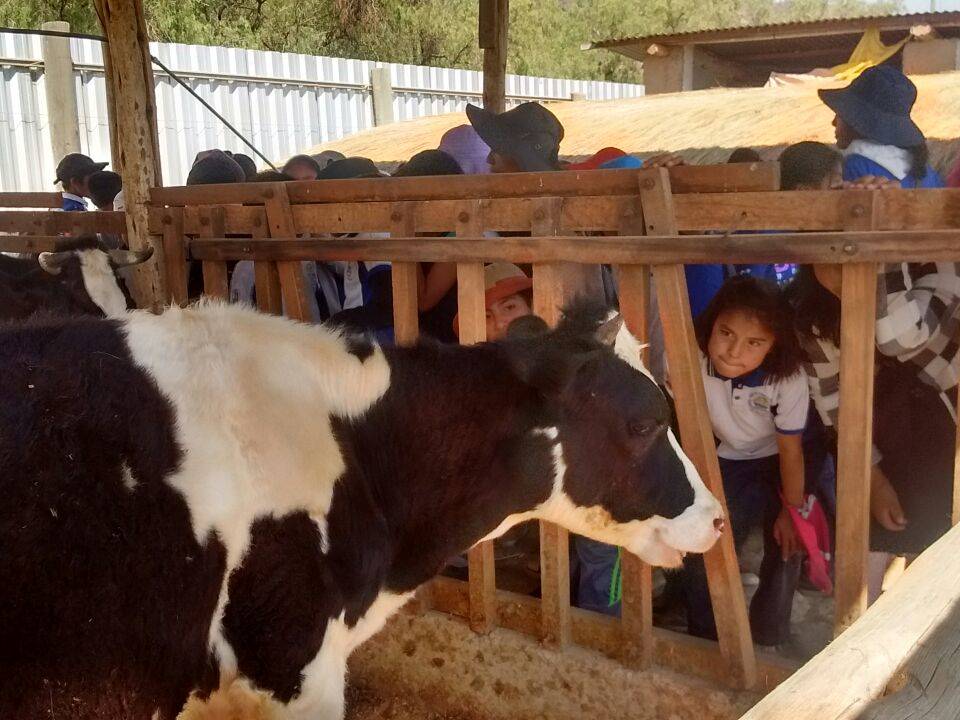 Students from Cochabamba visiting the Center for Ecological Agriculture.

As part of this project, Mano a Mano is currently devising plans for uniquely-purposed demonstrations and exhibits of sustainable agricultural techniques at CEA. While the staff at CEA has always modeled and applied several best practices of water and land management in the center’s own agriculture, as a community center, CEA will not just continue to use these techniques but also will incorporate them into several visual, educational “experiments” that will clearly and tangibly demonstrate agroecological principles and their benefits to visitors. This week, staff at the CEA and at Mano a Mano International began work on plans for a visual demonstration that compares the results and environmental impacts of three different irrigation systems (drip irrigation, flood irrigation, and sprinkler irrigation). After the installation of a subsurface drip irrigation system, the new demonstration will showcase to visitors and students the efficacy of drip irrigation, which almost entirely eliminates issues of evaporation and runoff and is the most water-efficient system of irrigation. This demonstration will be just one of several, as part of a developing program at CEA focusing specifically on water and its sustainable usage. 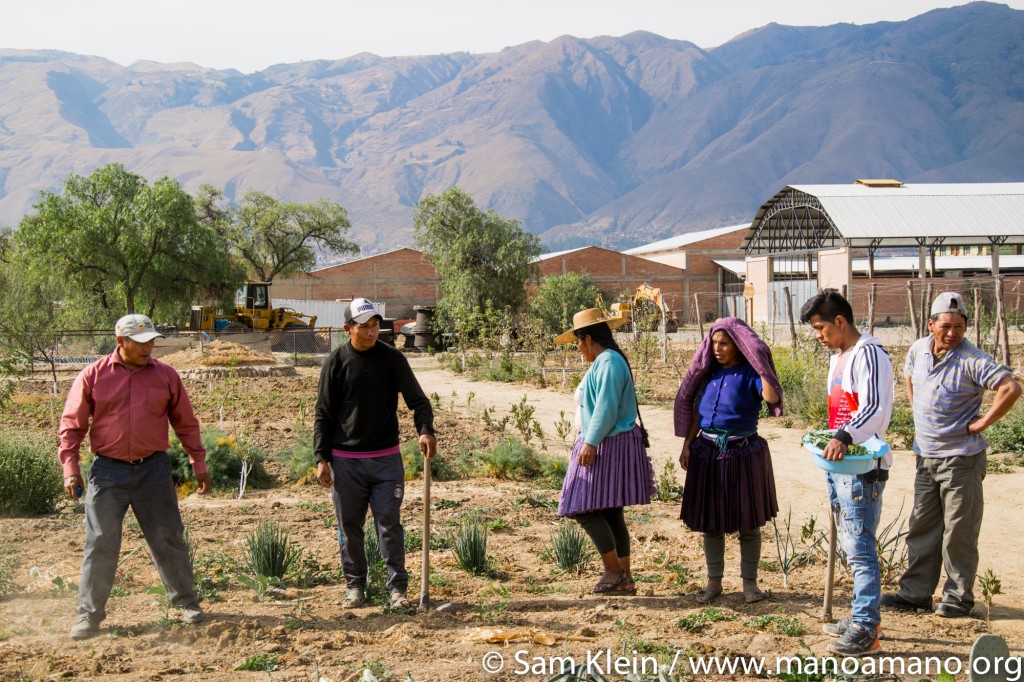 This week, two educational workshops also took place on Saturday and Sunday. The CEA is running a series of five workshops on permaculture topics; Saturday and Sunday’s workshops were on greenhouse construction and protected cultivation. Between both workshops, forty farmers from the municipality of Capinota were in attendance, learning about techniques to mitigate local environmental issues and improve the yield and sustainability of their land without harmful traditional practices such as chemical fertilizers. As these took place on the weekend, I didn’t have the chance to attend these events, but several more workshops with the Capinota farmers will take place next week, and are described in depth here. 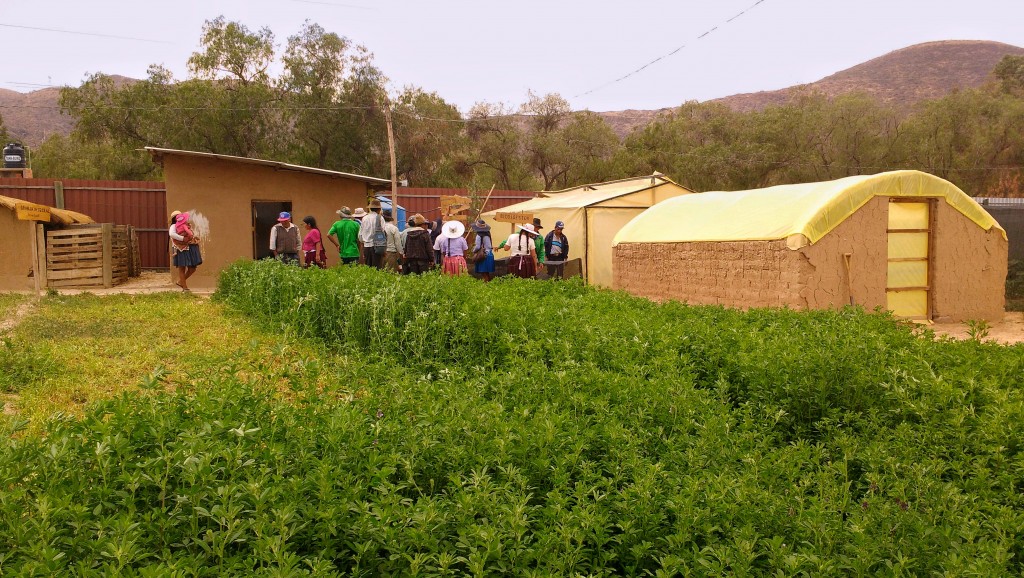 A group of farmers attending a workshop at the CEA, November 2016. 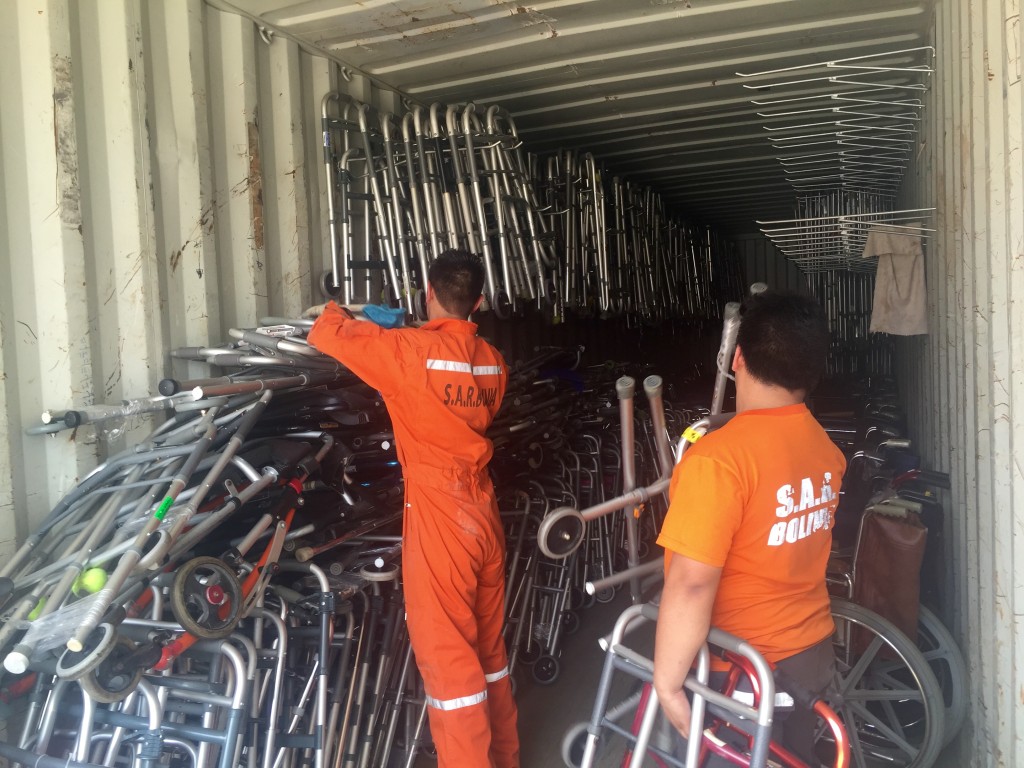 Unloading 1 of the 4 40-foot containers shipped from Mano a Mano’s St. Paul, MN warehouse, at the CEA in Cochabamba, Bolivia.

Finally, in this week at the CEA, on Thursday, we completed unloading all of the medical supplies from the remaining containers from the June shipment. With all Mano a Mano office staff and volunteers on hand, plus several additional volunteers from SAR, we were able to unload two shipping containers of materials in a single day—about 40,000 pounds of supplies, including hundreds of crutches, walkers, wheelchairs, and other equipment. After a particularly interesting but stressful morning, I really enjoyed being at CEA and seeing that, with only about a dozen people, we were able to move such a high volume of material and complete this enormous task together. In total, the process took about five to six hours of unpacking the containers, sorting and hanging supplies, and moving the heavier boxes and items to the warehouse with pallet jacks and forklifts. Over the next months, we will continue to sort and organize these supplies in CEA’s on-site warehouse, in preparation for our next major distribution event. 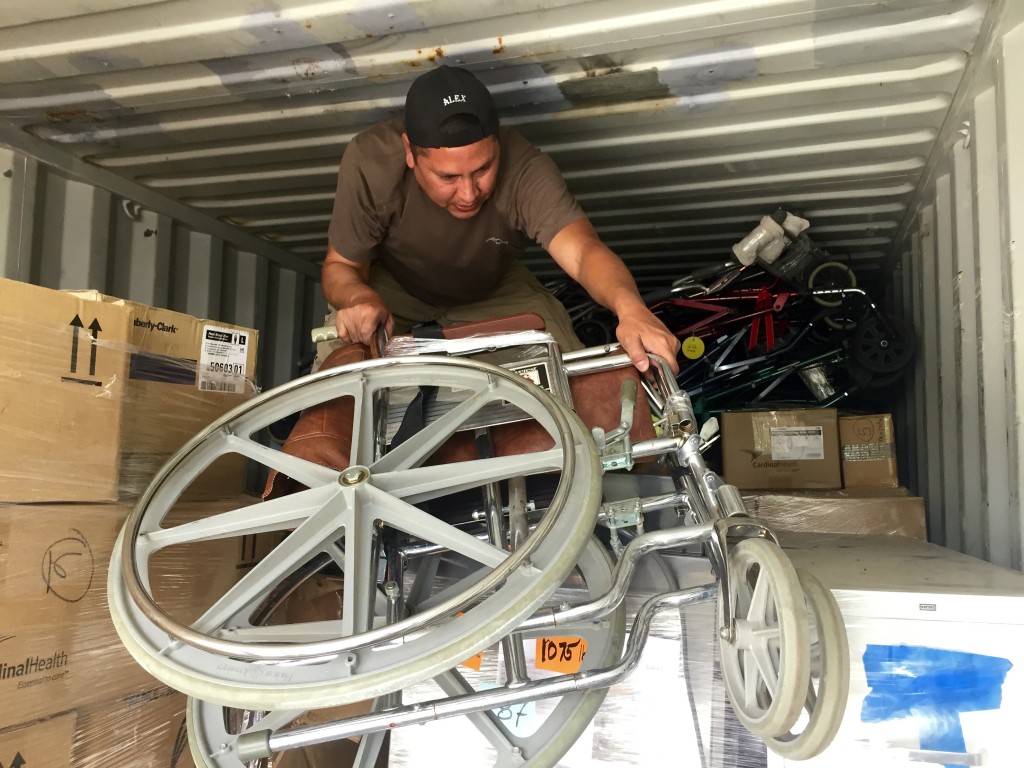 Unloading 1 of the 4 40-foot containers shipped from Mano a Mano’s St. Paul, MN warehouse, at the CEA in Cochabamba, Bolivia.

It’s been a busy week. And I know that this is just the beginning of a long and arduous process of new developments at the CEA, but everyone here is confident about the changes, and so am I.