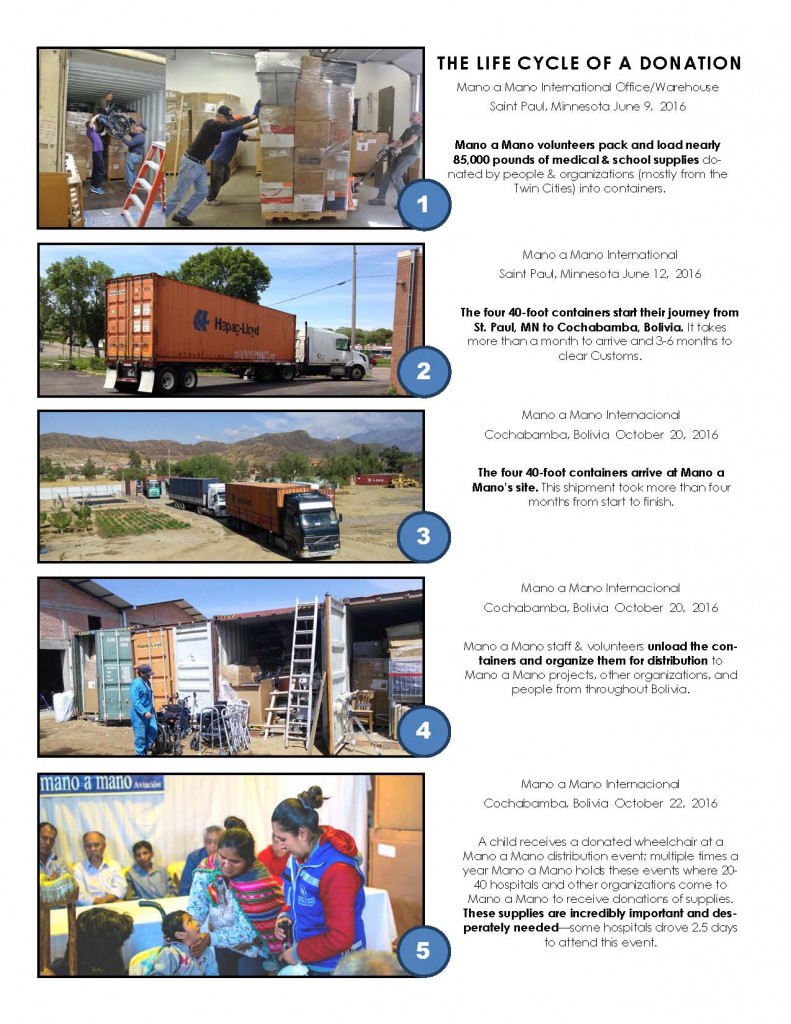 This is a guest post by Lindsay Emi. Lindsay is a writer and student from Los Angeles, California. She is eighteen years old and a volunteer from Princeton University’s Bridge Year Program in Bolivia. She will spend six months in Cochabamba volunteering with Mano a Mano, and then attend Princeton beginning in the fall of 2017, where she hopes to study English and creative writing.

In mid-October, early Thursday morning, four semi-trucks arrived at the gates of Mano a Mano’s Center for Ecological Agriculture (CEA). They unloaded four shipping containers of donated medical supplies adjacent to the platform in front of CEA’s warehouse. These containers have in total roughly 85,000 pounds of supplies and materials, all collected and originating from the US, ready to be sorted and distributed to public hospitals across Bolivia.

Containers arriving at Mano a Mano’s warehouse in Cochabamba, October 2016.

“This is such an exciting day for me,” said Ray, visiting volunteer manager of Mano a Mano’s Saint Paul-based warehouse. As a longtime volunteer for Mano a Mano, Ray oversees and coordinates all donated supplies and volunteers in the US. According to him, he’s handled every single item in CEA’s warehouse and in the latest shipping containers at least once at Mano a Mano’s Minnesota warehouse. 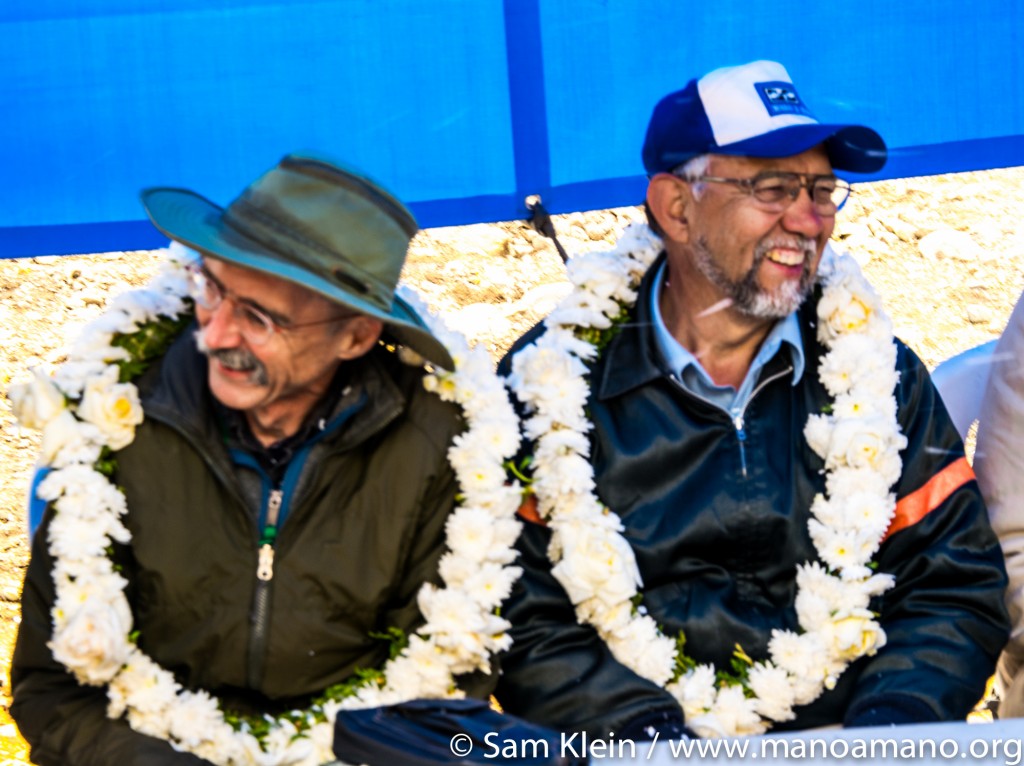 How exactly does a wheelchair or walker from Minnesota end up in a Bolivian hospital? The process of getting a shipment from the organization’s warehouse in Saint Paul to the CEA and eventually to hospitals and individuals is a long one, taking up to a year and relying heavily on the time and efforts of volunteers in both the US and Bolivia. (This most recent shipment, Ray explained, came “relatively fast,” arriving in Bolivia just five months after being shipped in June.) These 85,000 pounds of necessary supplies come from US hospitals, clinics, individuals, and organizations such as Goodwill. In Minnesota, supplies are picked up and delivered by volunteers to the warehouse in Saint Paul, where, with volunteer help, items are stored and sorted into twelve different categories, including orthopedics, wound care, vaccination items, and others. Once everything is organized, the sorted items are palletized into eight-foot cubes, wrapped in plastic, and loaded into shipping containers. Each container can hold eighteen pallets, with bulky extras like walkers loaded into any excess space, and weighs roughly 21,000 lbs apiece when at capacity.

From Minnesota, the shipping containers travel by boat through the Panama Canal, arriving in Chile. The containers must first go through Chilean customs before they continue on to La Paz, where they are then meticulously inspected by Bolivian customs. With the previous shipment, Bolivian customs officers opened every container and every box. They counted and documented every item sent, down to individual needles and pieces of gauze; according to Ray, the shipping containers sent by Mano a Mano were so efficiently packed, customs had to bring in another container to repack all the items after documentation was finished. At last, the shipping containers are transported to the CEA for another round of unloading, sorting, labeling, and finally distribution.

After the cost of the container, customs taxes, and other fees are accounted for, the cost of transporting a single container totals over $20,000 dollars by the time it reaches Bolivia. However, given that the cost of a single basic item like a walker might cost between $80 and $100, the worth of the contents of each shipment, with its thousands of items, might be as high as $1,000,000. Additionally, many of the supplies and implements themselves are not as accessible in Bolivia, further increasing their value. “I worked once with a nurse in Bolivia, Charo,” Ray told me, “and she’s been in situations where she had to use cardboard for a neck brace or a wrist brace. Being a nurse, she’s been in situations where she just didn’t have what they needed, and they make do with what they do have.”

On Saturday, October 22, the second large-scale donation and distribution event of the month took place from 9AM to 1PM, and can be viewed in full here. At this event, Mano a Mano volunteers distributed thousands of pounds of medical supplies, including crutches, walkers, braces and prosthetics, surgical tools, linens, and other medical implements. Recipients of these supplies included both individuals and dozens of staff members from public hospitals, many of whom expressed profound gratitude for the necessary donations that will undoubtedly improve the quality of care and life for, respectively, either themselves or their patients. 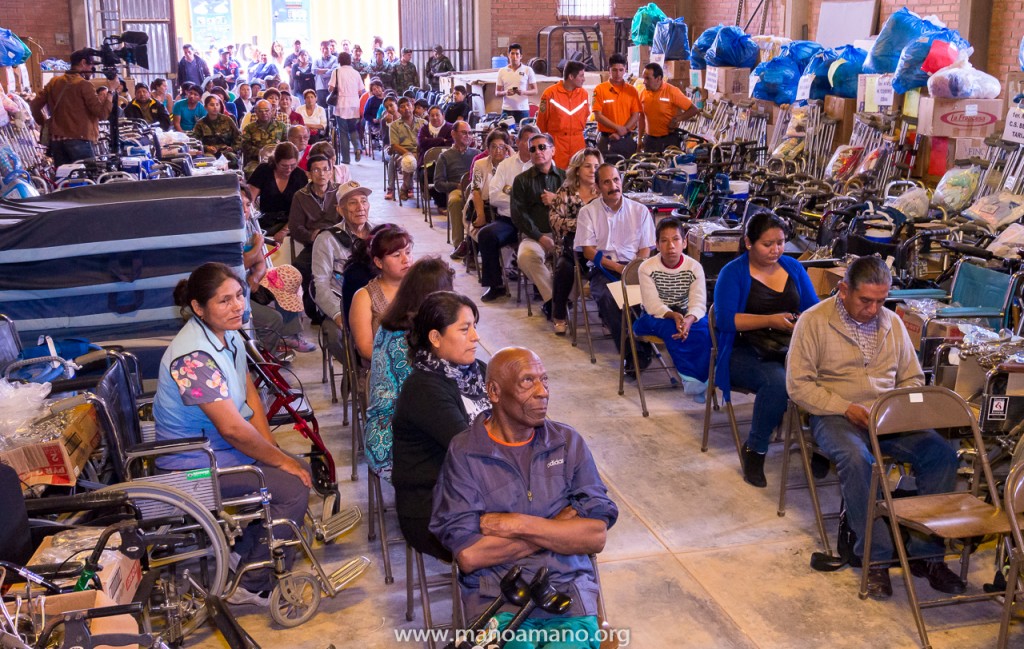 Mano a Mano president and co-founder Segundo Velasquez was present at this event. He offered words of gratitude for Mano a Mano volunteers in Bolivia and well-wishes for the recipients of the donations, and he also shared these words about the event: “The time and devotion taken by our Bolivian volunteers to receive, sort, and package the cargo for distribution in the part of all of you is admirable. 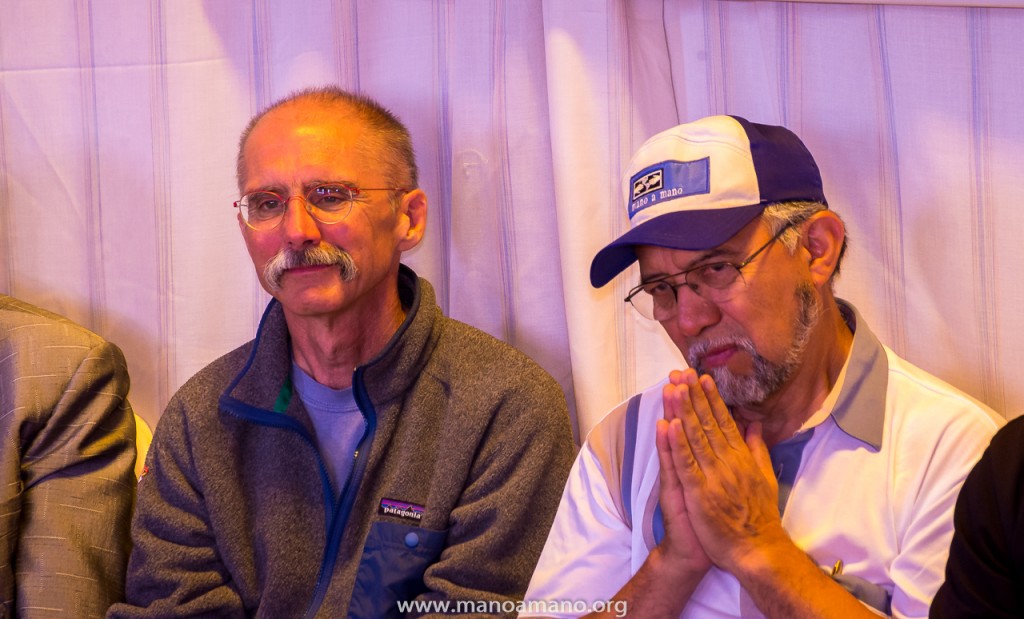 Ray and Segundo at the distribution event.

“I was impressed and in disbelief that so many organizations would drive so far to receive some of the donations—literally from the farthest points of Bolivia in the north and south. Even though people drove long distances, they indicated they were not expecting much. When many saw the amount of medical cargo prepared for them, they were shocked and excited to receive so much. Many groups drove the hospital ambulance to pick up the donation. Many had to make various trips and in some cases, like the people from Villazon, tied up all the equipment on top of the ambulance. They drove away with equipment towering over the ambulance.

“When many saw the amount of medical cargo prepared for them, they were shocked and excited to receive so much.” – Mano a Mano co-founder Segundo Velasquez 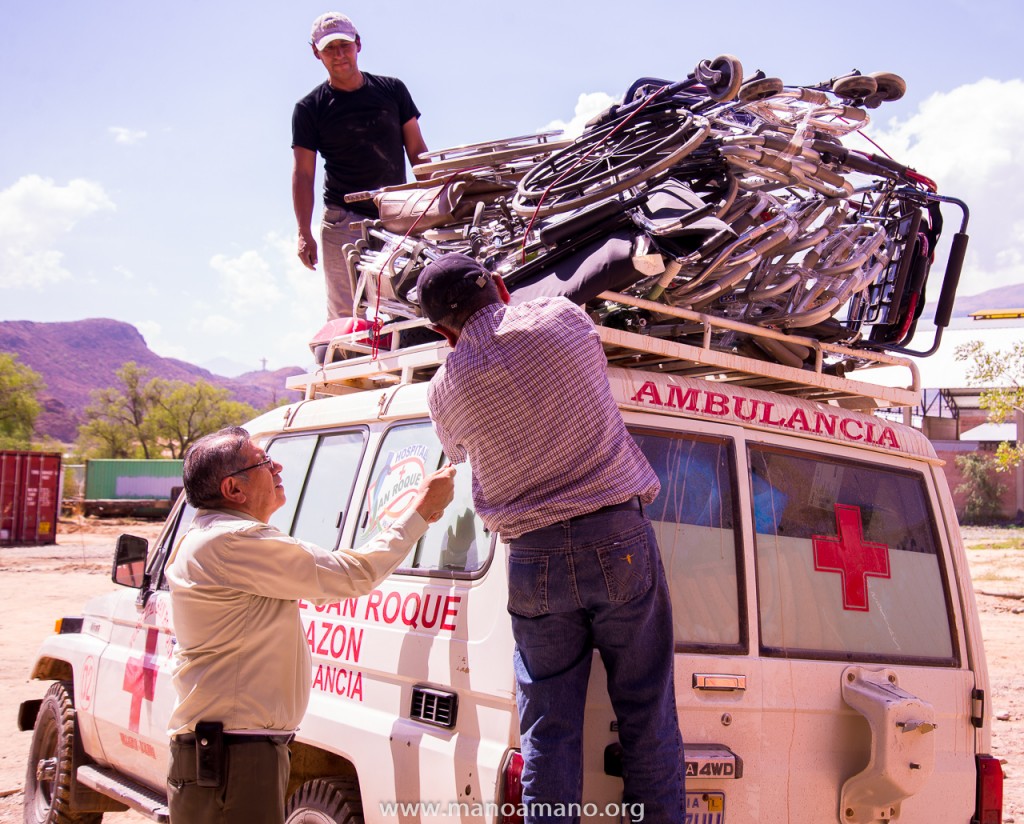 Tying up supplies on the top of the ambulance.

“People were grateful for all the donations, and quite a few of the groups will present the donations in public to their people. I was informed that all donations were badly needed. I am amazed that the hundreds and hundreds of boxes and the equipment disappeared from the Mano a Mano facility in what seemed like minutes.” 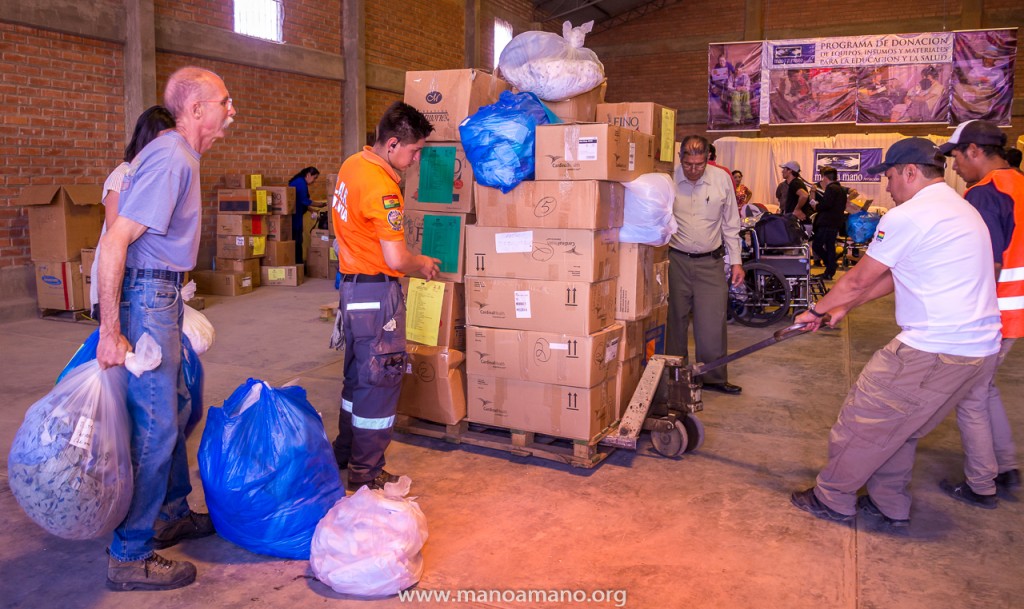 Clearing out the warehouse on October 22.

After all the materials from the last shipment had been distributed and the warehouse had been almost fully cleared out on Saturday, all the Mano a Mano volunteers present gathered on the platform and unloaded the first few canes and walkers from Thursday’s shipment. As of this writing, two of the containers have been fully unpacked and the remainder of the supplies will be unpacked by volunteers and stored in the warehouse over the course of the next week. Small-scale donations of medical supplies, in particular equipment for orthopedics and physical therapy specifically, are set to take place in December. Another large-scale donation is tentatively planned for February. Meanwhile, roughly 4,100 miles away in Saint Paul, Minnesota, four more containers are ready and waiting to be shipped. 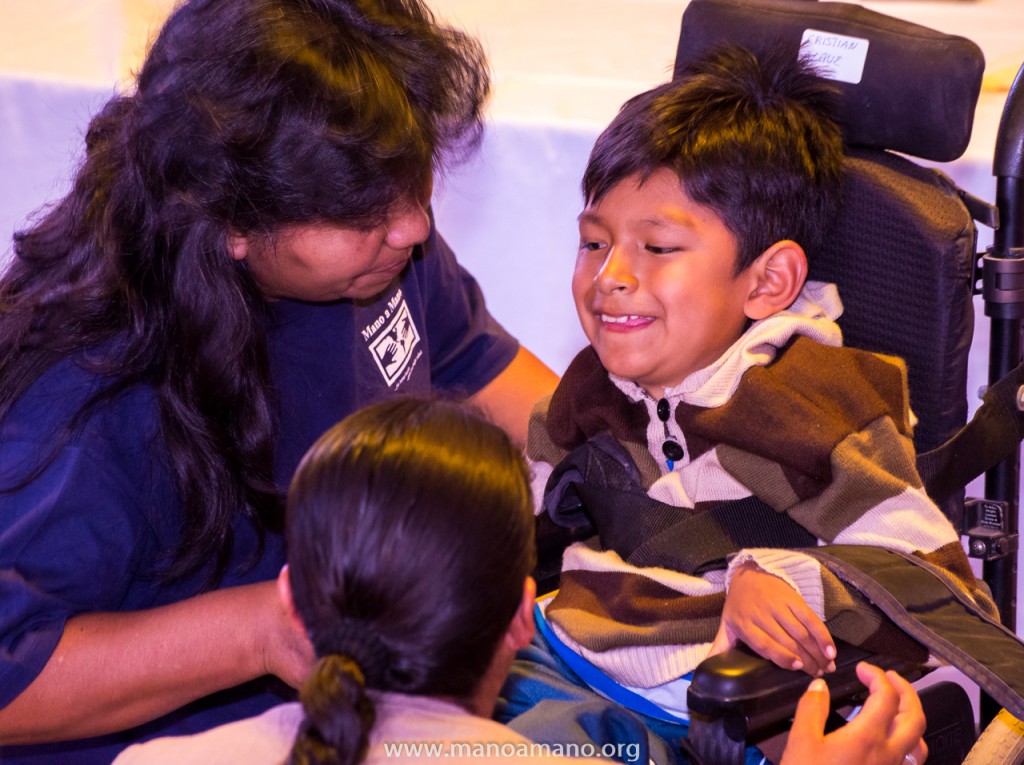 One of the many wheelchairs that were donated on October 22nd to people in need.