When the Rain Won’t Come: Farmers Receive Agricultural Training and Workshops in Omereque

Editor’s Note: This is a guest post by Lindsay Emi. Lindsay is a writer and student from Los Angeles, California. She is eighteen years old and a volunteer from Princeton University’s Bridge Year Program in Bolivia. She will spend six months in Cochabamba volunteering with Mano a Mano, and then attend Princeton beginning in the fall of 2017, where she hopes to study English and creative writing.

This is Lindsay’s 5th post; below are her first four posts:

When the Rain Won’t Come: Farmers Receive Agricultural Training and Workshops in Omereque

After a long vacation that included celebrating winter holidays with my host family and traveling with my program, I was so excited to return to Mano a Mano in mid-January, and not only to get back to work, but also to be able to travel right away, through the municipalities and communities of Omereque and Pasorapa. In the past three days, in part because of the extensive sixteen hours of travel between Cochabamba and the communities, I saw at least one example of every single major infrastructure project that Mano a Mano constructs except for greenhouses—health clinics, schools, roads, airstrips, water reservoirs, water collection tanks, and atajados (medium-size ponds used in agriculture for irrigation).

Our Story, And How You Can Help from Mano a Mano International

It was astonishing to see the reach and scope of all this infrastructure that Mano a Mano has built, but at the same time, as we saw many of our atajados not at full capacity even in the middle of the rainy season, I was reminded that some of our most critical work is not building infrastructure, but the training in sustainability and management of agriculture that Mano a Mano provides to rural farmers and community members.

I was lucky to see this in action too, back in December. At the end of 2016, Mano a Mano Internacional staff were excited to travel to the municipality of Omereque for four days of workshops and activities directly in multiple communities. I was able to go to Omereque on the last day with other volunteers to visit the community of Huertas, observe a set of environmental education workshops, and tour several atajados. 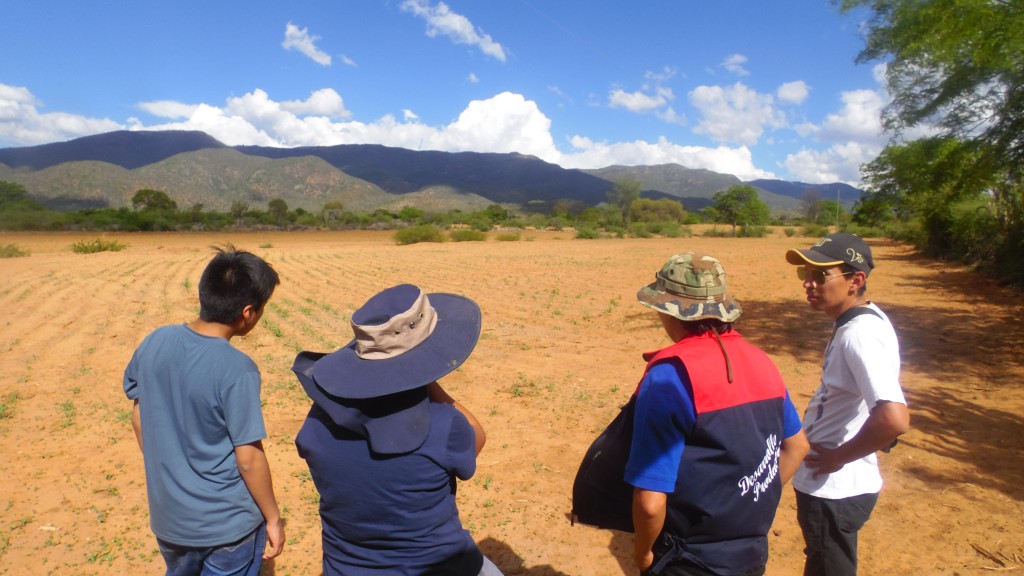 Mano a Mano staff and volunteers in Omereque, Bolivia, December 2016.

Located five hours away from the city of Cochabamba, Omereque is one of the municipalities in which Mano a Mano has been the most active. In the past year, the drought, along with its devastating effects on communities’ agricultural production, has been the most serious issue facing the municipality. The agricultural and commercial production of its major commodities, such as tomatoes, has been crippled by a lack of rainfall, the dryness of the Rio Grande and the Rio Mizque, and various crop diseases. Hundreds of those working in agriculture have ceased planting and production entirely, or gone into debt in order to continue planting. As we drove through the rural areas of the municipality to get to the communities, it was clear that the land and vegetation were extremely dry and almost desert-like, and many rivers, streams, and small ponds were reduced or completely dried out. 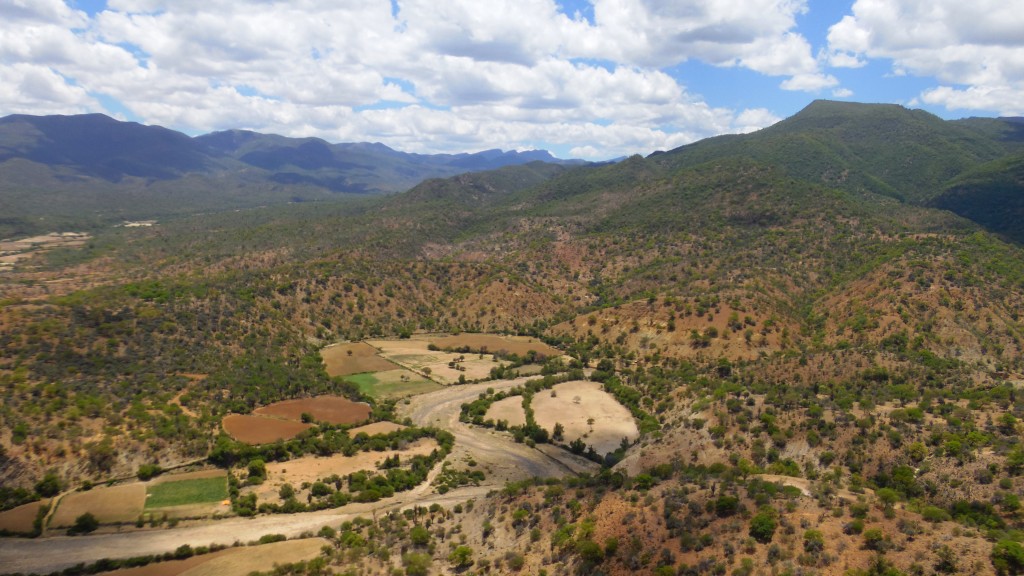 Omereque is Heavily Impacted by the Current Drought

Though the municipality has attempted to seek help, mitigating the crisis has been extremely difficult, and several hundreds of families and hectares of land have already suffered extensively. In a welcome speech to Mano a Mano staff at the start of the workshop, director of the municipality’s productive program Rildo Llanos explained, “We are arriving at a more difficult time in the municipality—our communities are located in a drier place, and we’ve depended on rains and rivers for agriculture, for drinking water, and now we are suffering in our communities because of the drought…we need to take advantage of the support that we have solicited, for our reservoirs and agriculture.”

“We are arriving at a more difficult time in the municipality—our communities are located in a drier place, and we’ve depended on rains and rivers for agriculture, for drinking water, and now we are suffering in our communities because of the drought…we need to take advantage of the support that we have solicited, for our reservoirs and agriculture.” – Rildo Llanos, Director of the Omereque municipality’s productive program

Though Mano a Mano continues to construct and maintain the atajados of many families in the municipality, it’s by providing dozens of community residents in Omereque with an education in resource management and low-cost techniques for ecologically-based production that Mano a Mano does the most to assist communities and their members in responding to the drought, ultimately helping them to sustain their livelihoods and families. Over our four-day visit, eighty residents of several communities including Robles, Mesada, Huertas, and Quebrachas attended workshops, presentations, and demonstrations led by Center for Ecological Agriculture (CEA) staff members Camila and Víctor. 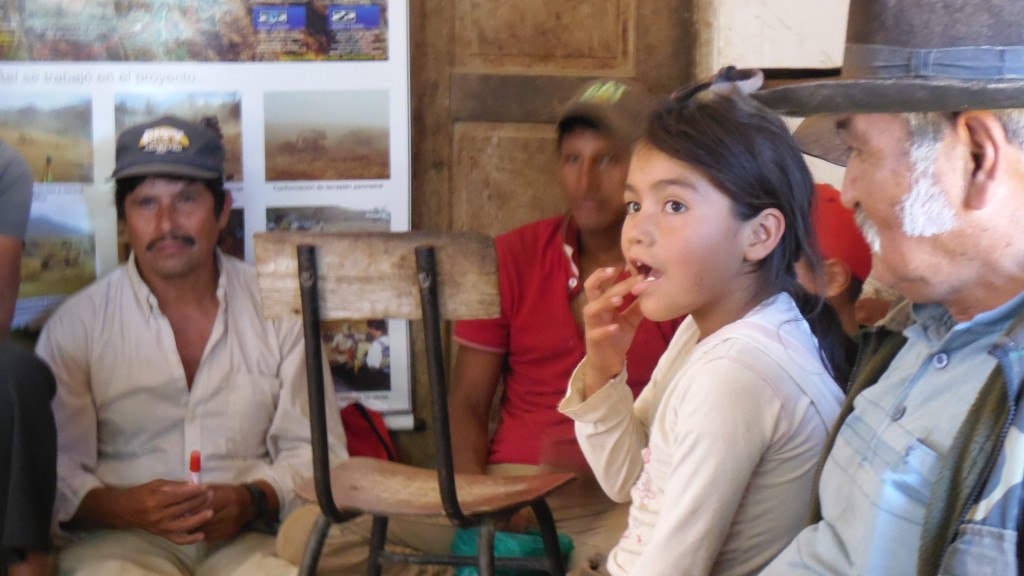 I was surprised to see that unlike our typical on-site workshops at CEA that focus on just one or a few specific topics per session, our workshops hosted directly in these communities cover an enormous variety of environmental themes: an overview of environmental resources and ecosystems, different types of pollution and waste, development and industry, climate change and its causes and consequences on an international scale, pesticides and agrochemicals, proper care of water and the environment, and others. However, the overarching concept of these workshops was an introduction to an ecological approach to agricultural production, which focuses on responsible care of the environment and sustainable management of land and water, including the water collected via reservoirs or atajados constructed with Mano a Mano assistance.

The workshops are also not formatted as lectures, but as highly interactive, participatory, and conversational. “We are not professors, or teachers, we’re not coming in to tell you, you have to do this, this, and this,” explained Víctor. “We’re speaking with each other as compañeros—we want to hear your ideas, your experiences, your methods, and we are sharing some of our experiences, some of the techniques and practices we have found useful.” Though at first it took some different games to get the group talking (a talking stick and a game of hot potato), I loved seeing how eventually, the farmers present readily spoke about their ideas and experiences, from offering thoughts on the origin of global warming to discussing their usage of pesticides in their agriculture. 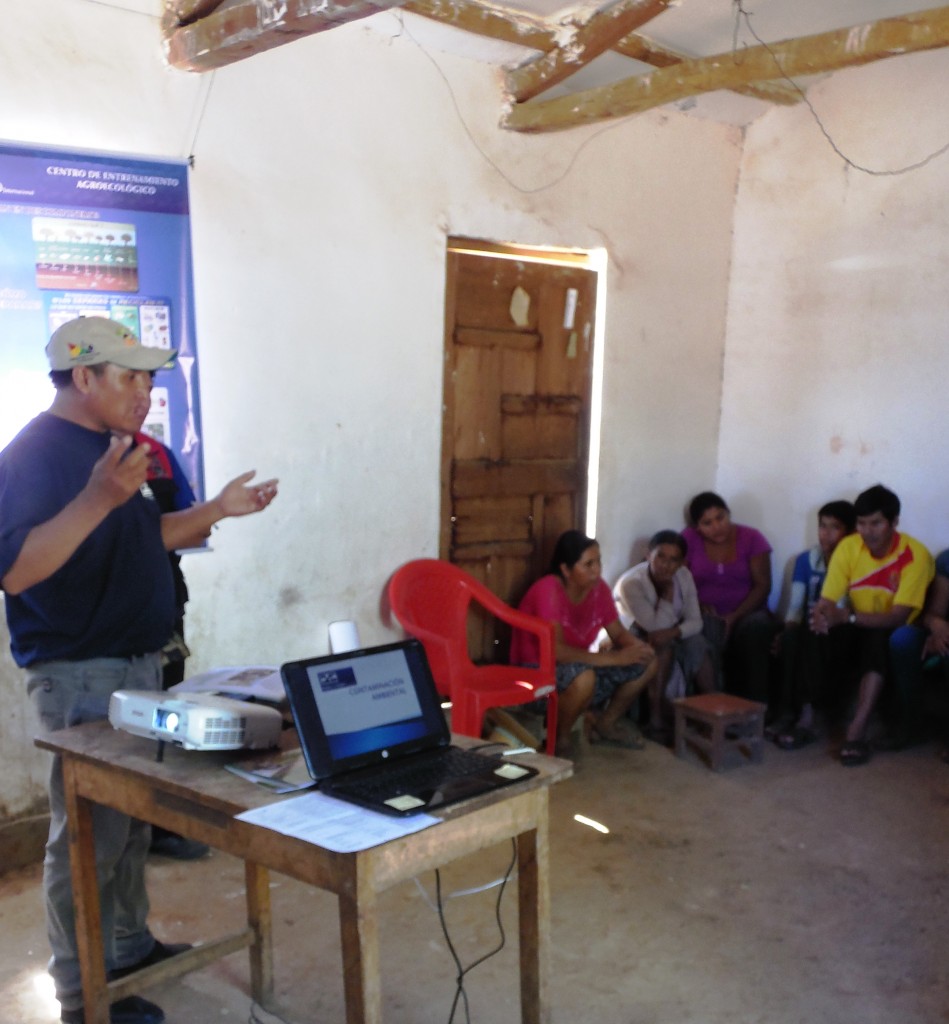 In one dialogue with Camila, the farmers discussed the changes they could make in their methods and the responsibility of the community to maintain their changes. “When we have customs, we have our ways of doing things–we can change them, but what is difficult is to maintain the changes. It’s common to believe that people are difficult, even impossible, to change, but it is easy to change–and maintaining our changes is difficult, but it is the responsibility of every person [to do so],” Camila said. “When we throw trash out, pollute water and rivers, use agrochemicals, we don’t recognize the damage we do until it accumulates–until maintaining our changes cannot be a recommendation but an obligation [imposed] by the situation of our environment.” In response, one farmer Esteban Maldonado commented, “I think that the truth is as you say. We are spoiled. We have been born into the customs of our community, and the customs of our Bolivian nation, and thus…we have always said that it is too hard to change. But we have to begin, and a day will come where we have to begin. I hope a day comes, compañeros, where we treat our responsibility to the community with the seriousness of an obligation, or a law.”

“We are not professors, or teachers, we’re not coming in to tell you, you have to do this, this, and this. We’re speaking with each other as compañeros—we want to hear your ideas, your experiences, your methods, and we are sharing some of our experiences, some of the techniques and practices we have found useful.” – Mano a Mano agronomist Victor Penarrieta

These particular workshops were designed to complement some of Mano a Mano’s past work in the communities, specifically our atajados project. These water ponds provide a stable source of water for families, and in this municipality is sometimes the only source of water that these farmers use and have access to. In our visit, we were able to observe several different atajados constructed by Mano a Mano, accompanied by Llanos, and found them in very different states. Although some were full and well-functioning, others were completely dry and empty because of severe drought and the late arrival of the rainy season; currently, Mano a Mano workers are renovating these atajados so they will be able to collect as much water as possible once the municipality receives some rainfall. 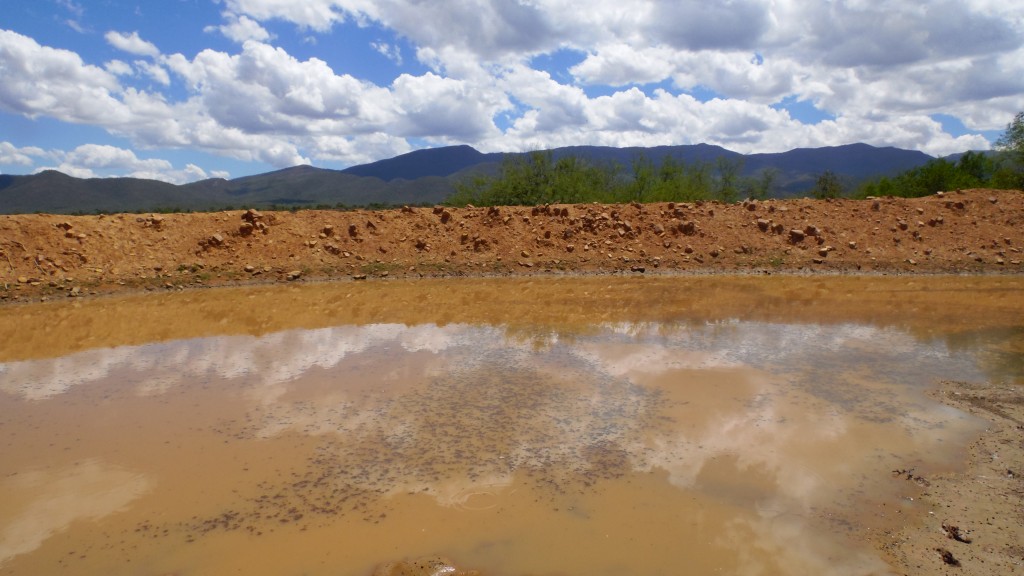 We also visited a few of the municipality’s ongoing well-drilling projects. Although within the past year, Mano a Mano has also been constructing wells in the area and plans to build up to twenty more in the next few months, for this visit, Llanos was showing us some of the large-scale efforts of the municipality. It was a dramatic contrast; workers were using enormous industrial machinery to drill wells of several hundred feet of depth into soil and sand that at its surface seemed to be incredibly dry and cracked. Farmers have had to carry water to their crops using small cisterns, Llanos explained, and the rate of migration has increased as hundreds of hectares of land in the municipality have dried out or been abandoned. For that reason, the wells are being constructed for irrigation and as a source of potable drinking water.

One of the wells being built by Mano a Mano in the Omereque area.

Though we are still hoping that the region will receive some rain through the next two months, the drought continues to be severe. In part because of the drought and in part because of the effective teaching and content of the workshops, the farmers in Huertas commented that at this time, they found the workshops and their content even more useful and impactful in improving their agriculture than the water ponds, and that it was actually the specialized training and support for their existing atajados that drew them to the attend the workshops.

Though nothing compares to the joy on farmers’ faces at seeing a reservoir full of water, the farmers say that it’s the training in practical and cost-effective agricultural techniques that sustains them during long periods of drought. At the same time, the farmers of Huertas and neighboring communities are exploring other Mano a Mano projects, such as a dry bathroom or a biodigestor, that, in conjunction with their training, will enable them to improve their communities and be of use in agriculture, by providing materials for compost. The farmers plan to send a delegate of representatives from their area to CEA for additional training and more information about these projects.

We look forward to welcoming the farmers from Huertas and other communities in Omereque to Cochabamba and our CEA when they visit us, and I can’t wait to work on our upcoming projects relating to both infrastructure and workshops as we visit, or revisit, communities in the municipalities of Capinota, Tapacari, and Pasorapa next.