Donating Thousands of Pounds of Medical Supplies in Bolivia

Sam is an 18-year-old volunteer from Boston, Massachusetts on his breach year from high school, with plans to pursue a degree in journalism. Sam arrived in Bolivia on July 26, 2016 to volunteer with Mano a Mano in the Center for Ecological Agriculture (CEA).

Donating Thousands of Pounds of Medical Supplies in Bolivia

A woman, holding her toddler in her arms, walked to the front. A volunteer rolled out a small wheelchair, and helped the woman gently lower her son down into the seat. As the volunteer and mother let go and fastened the seatbelt, the room broke out into applause. 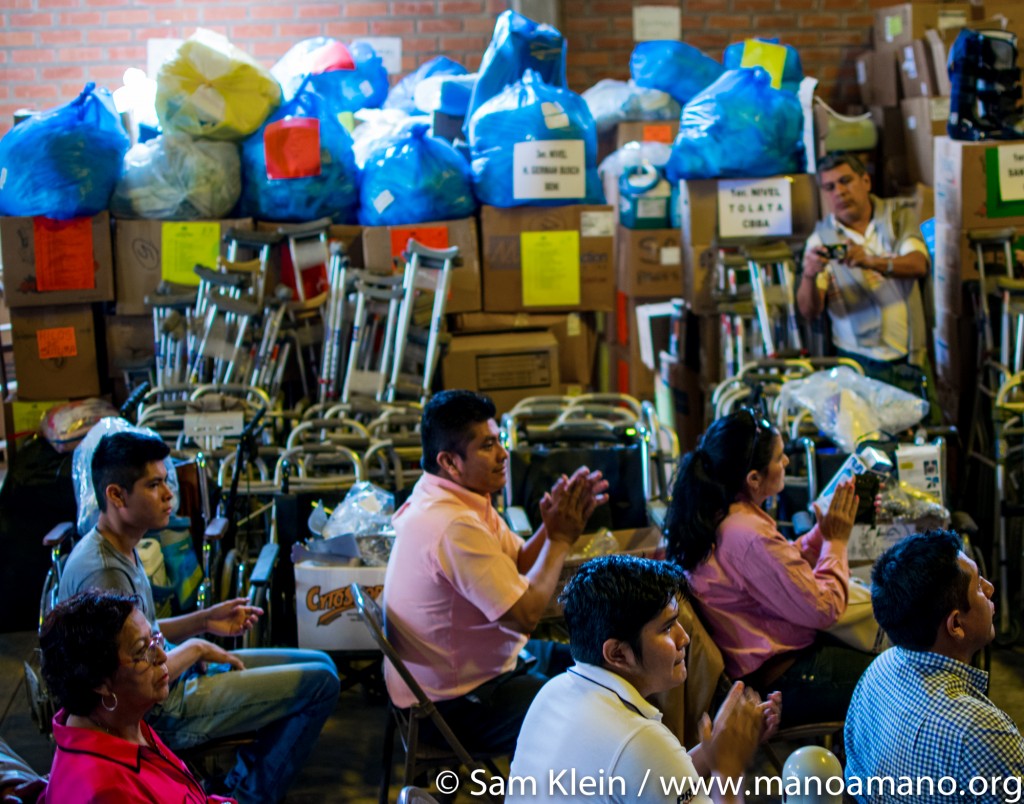 Hospital representatives applaud a speech during the distribution on October 8th, 2016.

Legs that don’t work. A broken foot. A leg lost in a train accident. For most in rural Bolivia, the results of disabilities like these can be drastic and devastating. A solution is unthinkable, due to cost and lack of access to anywhere that can help. Unthinkable, that is, until Saturday, Oct. 8.

Alongside Mano a Mano, those afflictions just mean a wheelchair, a medical boot, or a prosthetic. 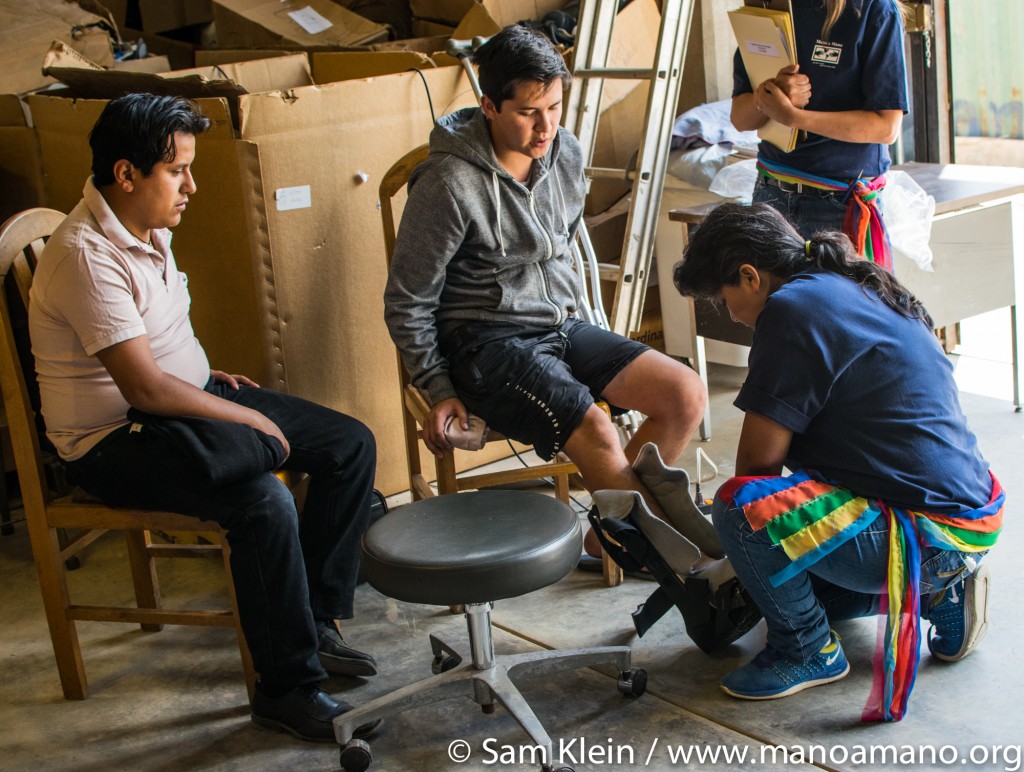 A volunteer helps put a medical boot on a man with a broken foot.

On Oct. 8, Mano a Mano held the first of two large-scale October donations. Composed of medical supplies from the United States – such as surgical implements, wheelchairs, and even an x-ray machine – Mano a Mano provided those donations to 40 medical clinics & health organizations from throughout Bolivia.

Around 100 people attended the event at the Center for Ecological Agriculture (CEA), including Mano a Mano volunteers, clinic representatives, injured recipients, and Mano a Mano co-founder Segundo Velasquez. 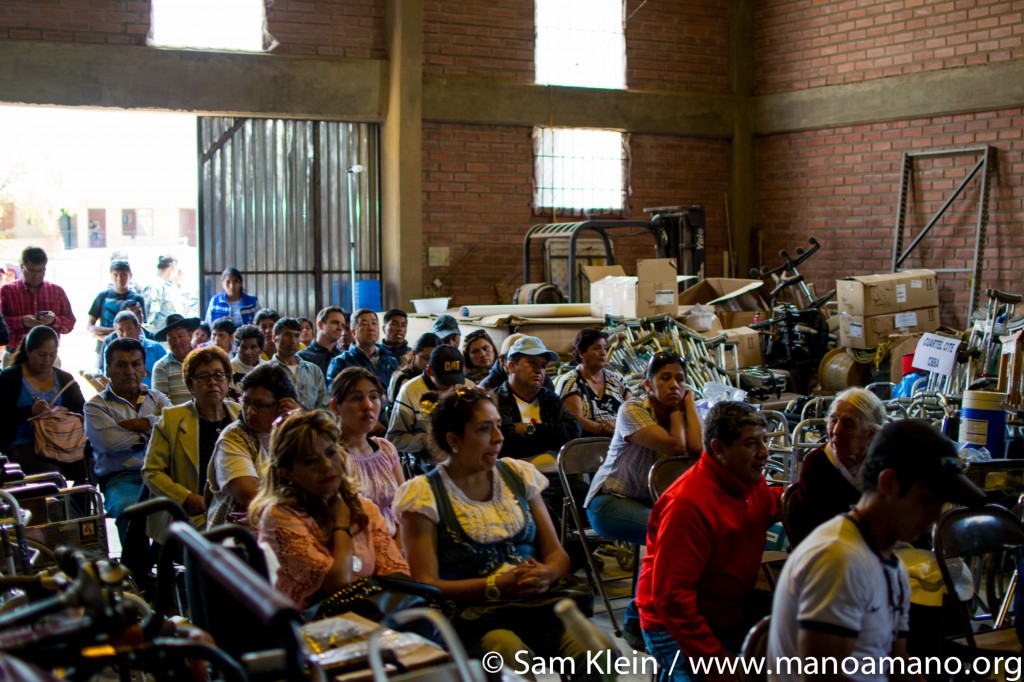 Representing the Hospital Presidente German Bush in Beni, José Alemano Montero helped carry boxes and individual items to a truck for transport. He believes the supplies to be invaluable for the place that they are headed.

“We are benefiting from what you’re doing and bringing these things to sick families,” Montero said. “They are going to benefit from every single one of the medical supplies that was donated by Mano a Mano.”

For many of the recipients of these donations, the chance to use a wheelchair is life-changing. In rural Bolivia, this chance is nearly impossible without Mano a Mano. With a broken or amputated leg, life in the countryside turns more difficult than it already is. Moving around is not an option, and therefore neither is working. 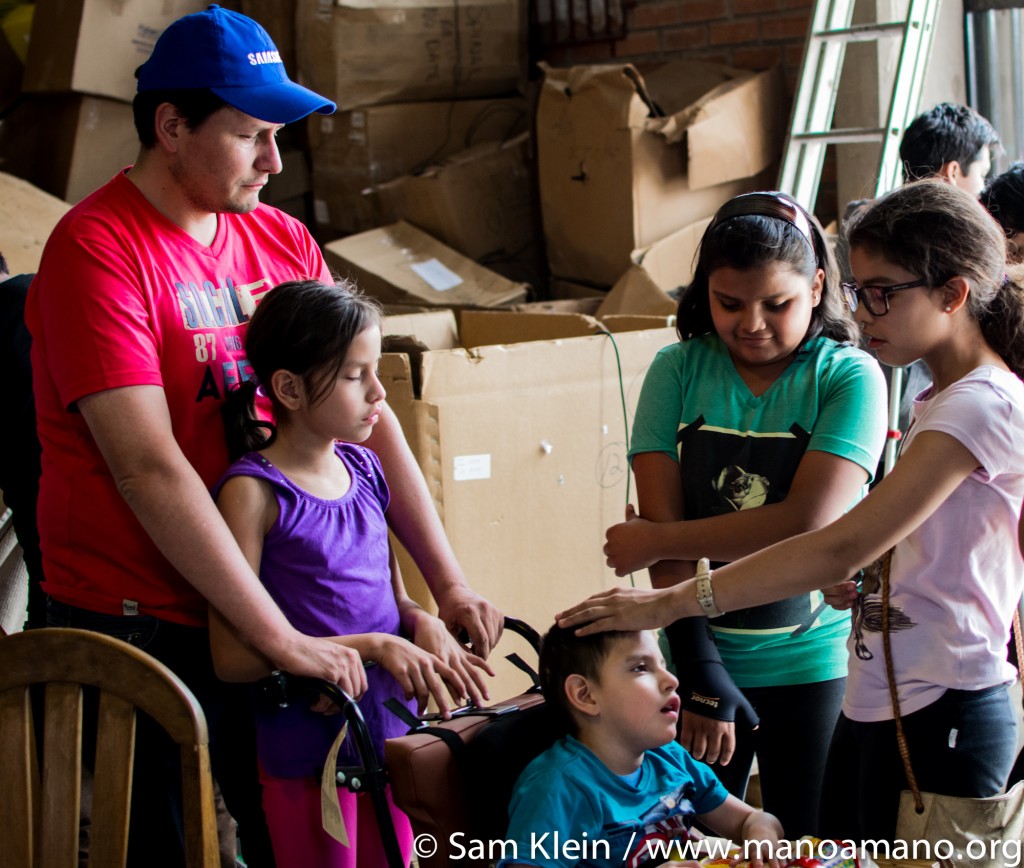 A girl talks to her brother in his new wheelchair.

Having a wheelchair lessens that blow and helps both an individual and a community as a whole.

The ceremony included presentations of some of the donations. These were made more powerful by having the recipients walk to the front of the space, with the representatives from the clinics watching, to receive what they needed. This included the woman with the wheelchair for her son. These were the most emotional moments of the event. 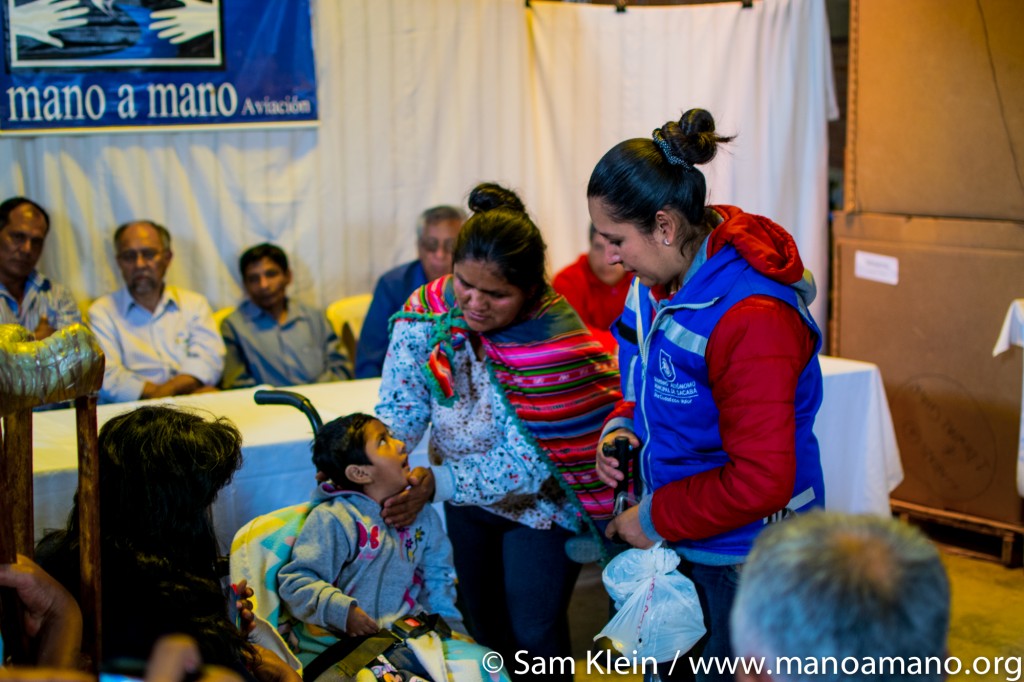 A woman places her son in his new wheelchair.

Times like those showed the people watching at the CEA, as well as those live streaming the event in the United States and elsewhere, what Mano a Mano really signifies. By transforming a person’s life with a day like this one, all the hours of collecting, sorting and transporting the supplies suddenly become worth it. 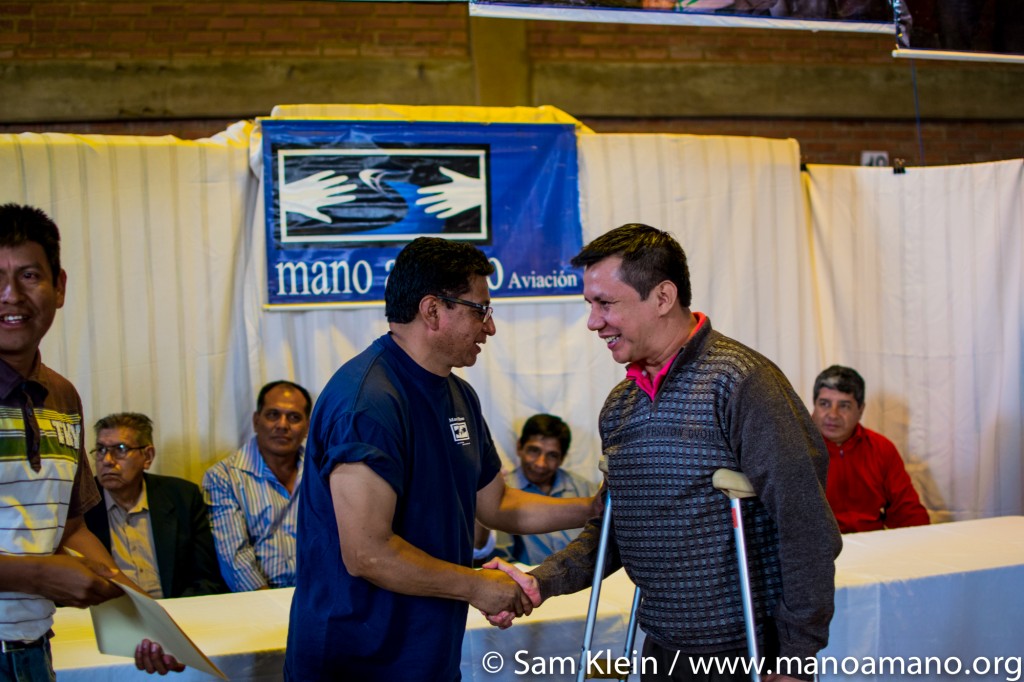 A Mano a Mano volunteer shakes hands with the mayor of San Ignacio de Moxos after he received a donation of crutches.

The primarily small clinics and health organizations that Mano a Mano donated to would not otherwise have access to these sorts of crucial supplies.

“Honestly, the patients we have, they barely have shelter when they aren’t in the hospital. We lack these kinds of medical supplies because of the poverty there,” Montero said. “German Bush is the only hospital in the area, and it serves eight different provinces. It’s incredibly difficult to go to a hospital like the ones in Santa Cruz, Cochabamba, or La Paz.”

Now approaching its silver anniversary, Mano a Mano continues to do the work that it started with in 1994, and at an astonishing pace. Every box of medical supplies that arrives in Bolivia is another on a long list of boxes, and another number added to the continuously-growing tally. But each item means much more than just a number.

For the Bolivians like Montero that broke out in smiles as they loaded boxes and wheelchairs onto trucks and into cars around 1 p.m. in Cochabamba, every one of the donations meant a chance to improve and lengthen their lives and their children’s. 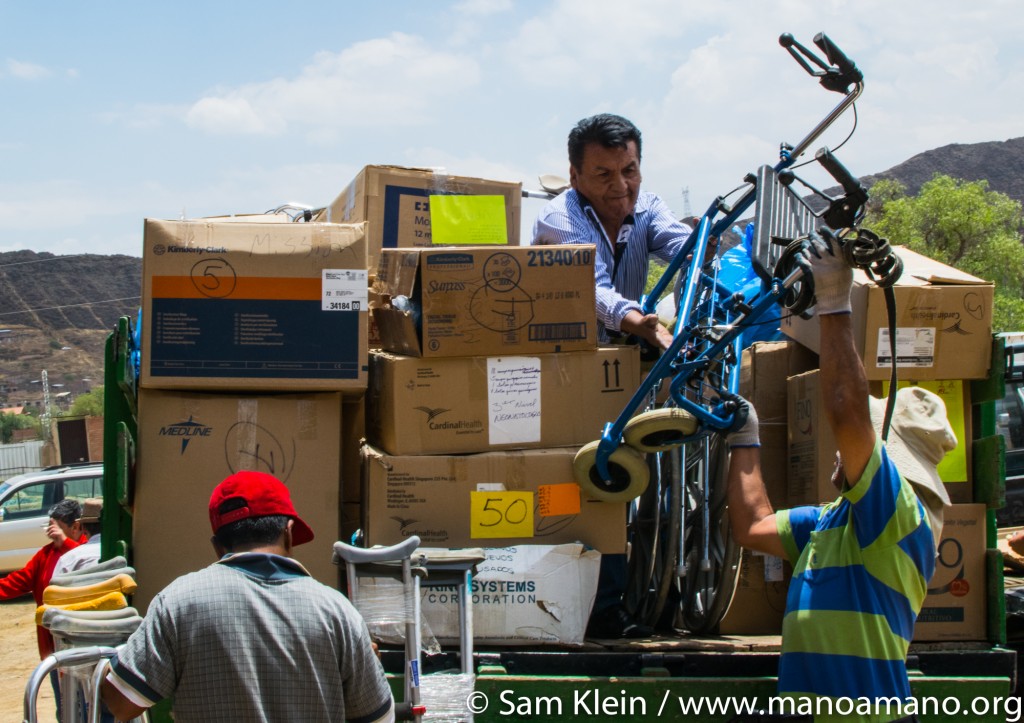 Hospital representatives load up a truck with supplies.

Livestream of Distribution of Supplies in Bolivia

Watch the archived livestream of the distribution event on October 8th, 2016:

Read more about the preparation of these supplies HERE.

HERE are pictures from our last distribution event in November 2015 where more than 40,000 pounds were distributed at the Mano a Mano hangar in Cochabamba, Bolivia. The two upcoming distributions on October 8th and 22nd are the first two distributions that will take place at our new distribution space in the Center for Ecological Agriculture.

The video below is taken from the November 2015 distribution:

If you are interested in supporting Mano a Mano’s distribution program (our Minnesota warehouse is filling up fast with donated supplies, and we are hoping to make one more shipment to Bolivia before the end of the year), you can MAKE A DONATION HERE.