Sam is an 18-year-old volunteer from Boston, Massachusetts on his breach year from high school, with plans to pursue a degree in journalism. Sam arrived in Bolivia on July 26, 2016 to volunteer with Mano a Mano in the Center for Ecological Agriculture (CEA).

Highway 4 winds through the mountains east of Cochabamba on the way to Santa Cruz, passing through dozens of rural communities and towns on its way. The road offers a striking contrast to the hundreds and hundreds of dull, brown potato fields that surround these communities, where Quechua-speaking farmers harvest their crops as they and their families have for many years. 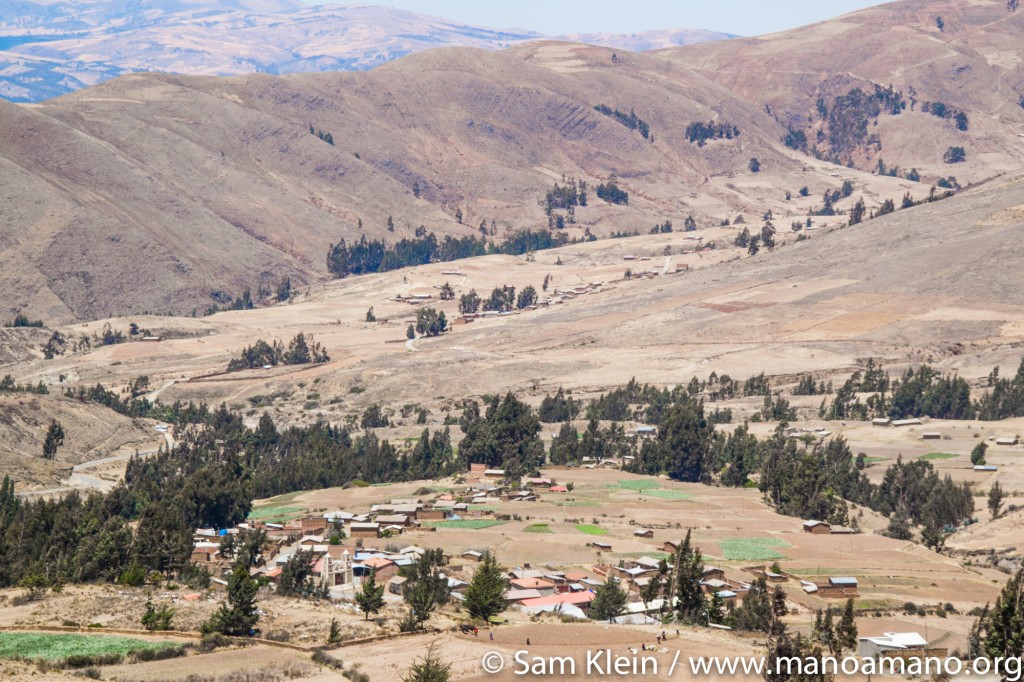 Five communities will benefit from the Wirkini water reservoir.

Five communities will benefit from Wirkini.

Typically, farmers rely on the rainy season, which takes place during Bolivia’s summer between December and April. Under traditional methods like flood irrigation, which can waste significant amounts of water via runoff, these rainy months are crucial for harvests. Losing a harvest can threaten starvation.

So as Bolivia undergoes its worst drought in a quarter-century – the rainy season this past summer lasted less than two months – many farmers have reason to worry. Water is scarce, and the potato fields that line the highway are in duress.

But for 400 families (more than 2,000 people) in Tiraque municipality, just 50 kilometers east of Cochabamba, the ongoing struggle to conserve water is coming to an end.

The Wirkini water reservoir, started in 2012, will be dedicated in the second week of October.

Wirkini water reservoir, a Mano a Mano project in Tiraque, is nearly complete, and is scheduled to have its inauguration in the second week of October. This reservoir will aid five communities year-round, not just during the rainy months.

The reservoir, where construction started in 2012, is one of many similar projects that Mano a Mano has done – the number reaches into the triple digits. For those in the communities, however, this reservoir is new and life-altering, ensuring water security for hundreds of people that never had it before.

“For four hundred community farmers, this will dictate the harvest of potatoes, onions, and oats, which are very important,” said project supervisor Rodrigo Romero. “They can have something from this reservoir that, right now, they lack.” 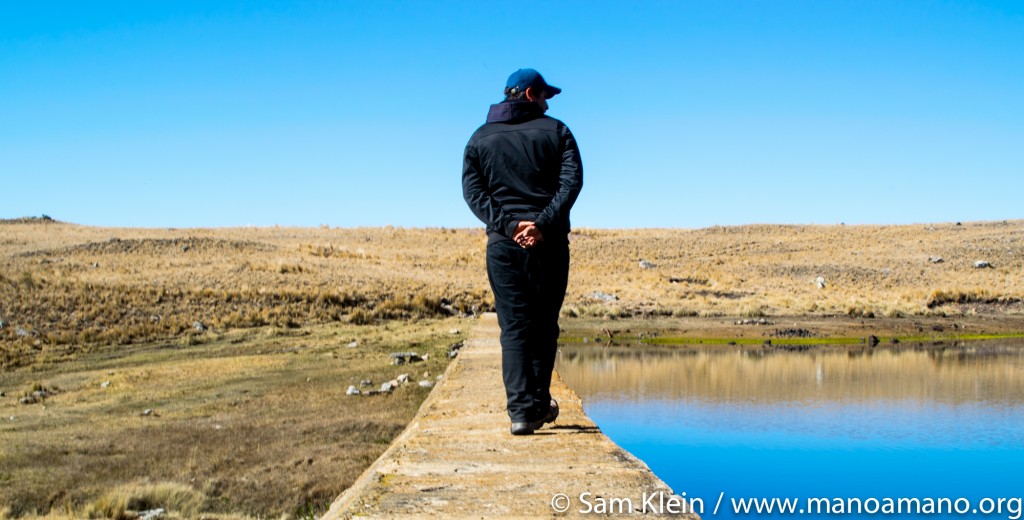 Rodrigo Romero, one of the project’s supervisors, walks along the dam of the top reservoir.

Wirkini, however, is not simply a gift. The four years of construction needed for the reservoir involved a rotation of work between the communities; one community would work one week, another the next, and so on for a five-week cycle before starting up again. 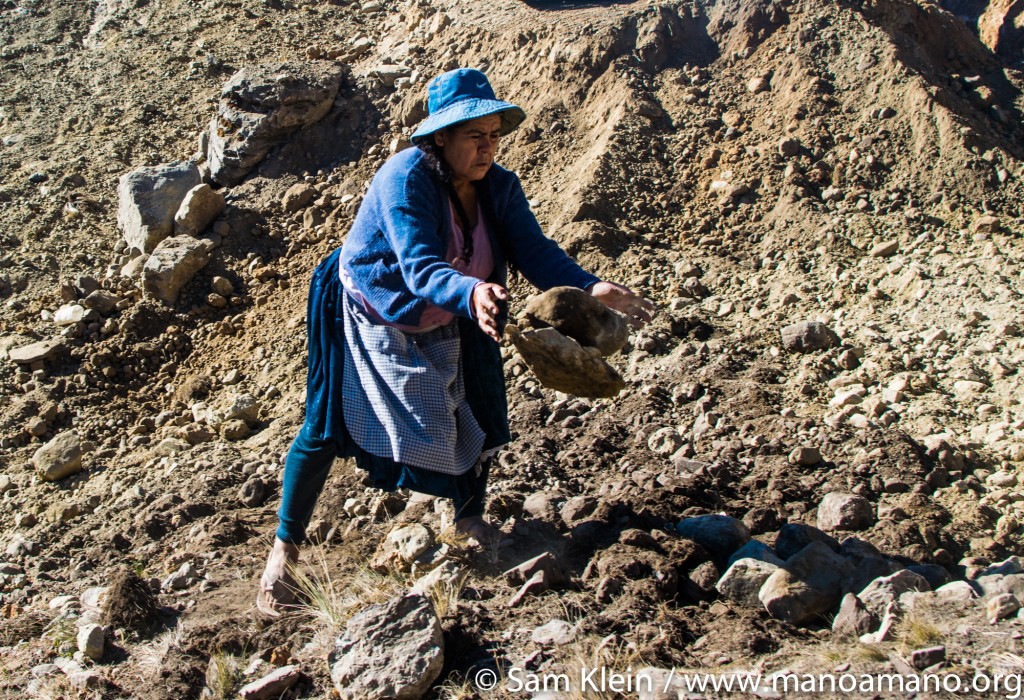 A local woman works on the reservoir.

The finished product is actually composed of two reservoirs. One, higher up, has a small, concrete dam that overflows during the rainy season. The lower, larger one has a more imposing rock dam, as well as a concrete channel that leads to a river system. The system, which will not remain dry for much longer, leads to all five communities. The channel that the water will flow through is the only piece of the reservoir network not quite complete. 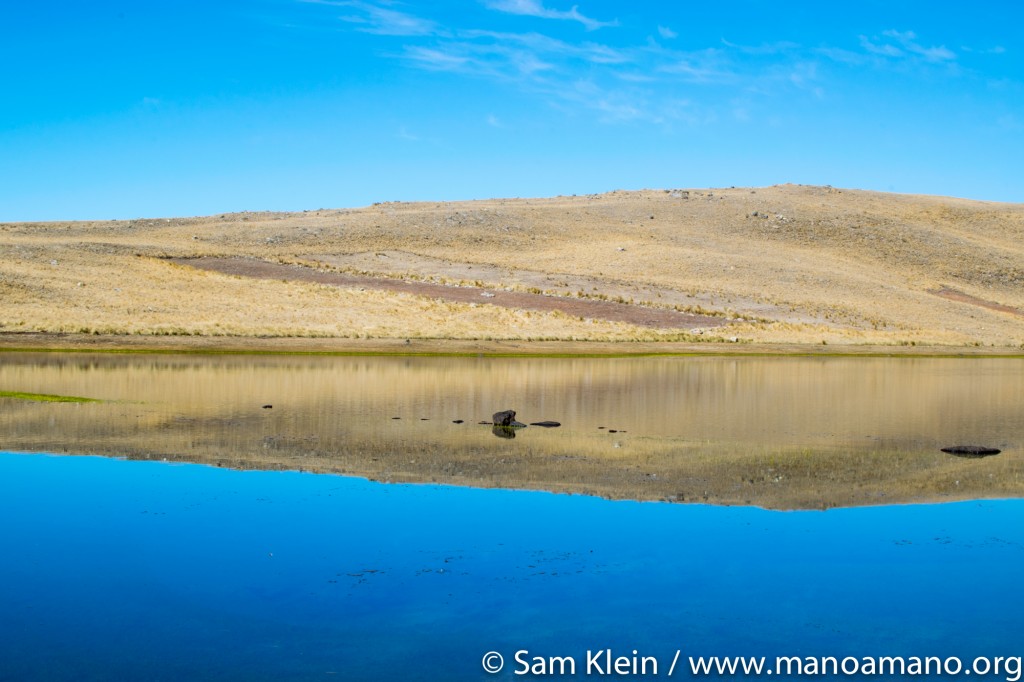 The project is composed of two reservoirs. The higher of the two, pictured here, flows into the lower.

With construction almost finished, members of the five communities are close to a more stable, comfortable way of life for them and their children.

“It’s going to help them in times of drought from losing their harvests,” Romero said. “This project means that they’re going to be able to constantly have water, rather than struggle in dry periods like this.”

“It’s going to help them in times of drought from losing their harvests,” Romero said. “This project means that they’re going to be able to constantly have water, rather than struggle in dry periods like this.”

The length of the rainy season, which most likely will begin in a few months, matters as always. But even in the case of another exceptionally dry summer like the last, the people of Tiraque will be able to collect their harvests.

The scenery visible from Highway 4 remains unchanged. Despite that uniformity, however, two kilometers down a dirt road off the highway lie two water reservoirs that are about to change the lives of 400 families.