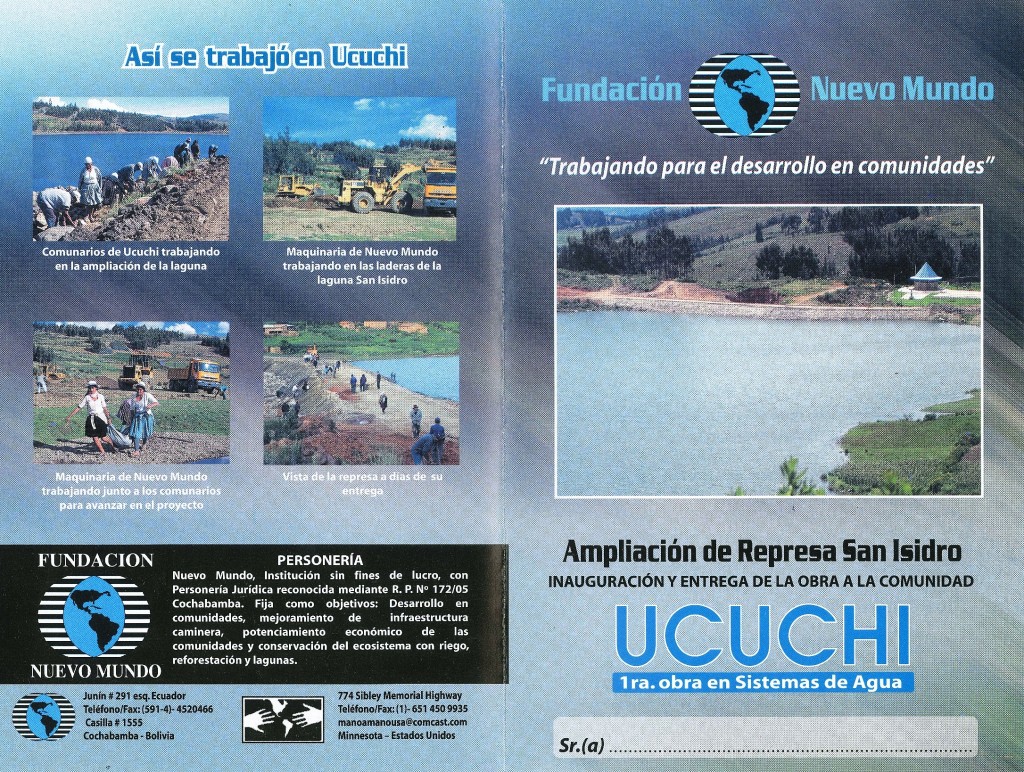 Mano a Mano completed its first water reservoir project in 2005 in Ucuchi, a community just outside of Cochabamba. 3,600 people directly benefit from the project. In its first year after completion, 640 hectares of land were being irrigated, as opposed to 250 hectares previously, and personal incomes went from $150/year to $300/year. In 2013, Mano a Mano completed an expansion of the channels to improve the collection channels that direct water to the reservoir, in order to increase the volume of water.

Mano a Mano has completed more than 300 projects, with a number of new projects underway at any given time. Every new project is a direct request from each community, and they are an active participant throughout the process. There are hundreds of communities on our waiting list for projects, and we are trying to meet the high demand as our resources allow us to.

But the most important aspect of these projects for Mano a Mano is the sustainability of projects that have been built; we want to ensure that anything that we build is used efficiently, is used for its intended purpose, and is in use for a long time.

One of Mano a Mano’s basic philosophies in our community-based development model is to provide the most basic needs for communities – clinics, schools, roads, water projects, aviation runways, agricultural tools and training – that can serve as a springboard for other projects. (For an example of this, watch this video about our road project in El Palmar, Bolivia.)

Recently, the Cochabamba newspaper Los Tiempos ran an article about the San Isidro Ecotourism Park, and Mano a Mano’s Ucuchi water reservoir is an integral part of the park. We are happy to see the impact that this project continues to have, more than a decade since its dedication in March 2006.

The article is translated into English and is below, in its entirety; here is the link to the original Los Tiempos article in Spanish, with additional pictures.

In the high altitude of Sacaba, 35 kilometers from the city of Cochabamba, is the San Isidro Ecotourism Park. The park receives more than 14,000 visitors each year for camping, boating, rappelling, and fishing.

The wide variety of recreational activities are made possible by the topography of the park.

It has an artificial lake of 2 kilometers. On its shores there is a replica of the Morgan Galleon, 15 meters long and 10 meters tall. The Morgan Galleon is historically known as one of the most famous pirate ships of the 17th Century, roaming the Atlantic Ocean.

In the lagoon, there is fishing, boating, and kayaking. The area is known as Kocha Canto and can reach up to 12 meters of water depth, but this year reached 6 meters due to the lack of rain.

Children taking a boat for a ride on the Ucuchi Water Reservoir, part of the San Isidro Ecotourism Park. Photo Credit: Jose Rocha and Los Tiempos

The canyon of Puca Puca is a geological formation caused by wind and water erosion, opening an area of 15 meters long by 25 meters deep. The canyon is used by tourism agencies for rappelling.

There is also a native forest in the Canada Wayku creek with Pine, Eucalyptus, and Kewina trees.

In 2016, national and international musicians recorded 38 music videos there. “Many different folklore groups came here from around the country, but Yarita Lizeth from Peru and Sasha from Argentina were also here,” said Choque.

There is a children’s playground and a soccer field. Admission is free; the Mayor’s Office budgets 250,000 Bolivianos (about $36,000 in US dollars) for its operation.

Gregorio Choque is the only park ranger and is in charge of registering visitors, lending out boats, helping visitors and providing security.

The municipality is planning to host a mountain biking circuit in July, in addition to acquiring 10 kayaks and more equipment. They will also increase staffing.

At that time, they plan to start charging 2 Bolivianos (.29 cents in US dollars) for entrance for tourists. These funds will go to maintenance and improvement.

The park opened in 2008 as an alternative for visitors to Cochabamba. Currently they are working on improving the park to attract more visitors.

The park ranger explained that it was difficult at first, since the local community had to learn about community-based tourism.

“At first, they didn’t know anything about community-based tourism and they were a little wary, but they have adapted to it since then. On the weekends, they sell fish, caretake the area, and help me with security, ” he indicated.

The community of San Isidro has a population of 200 that primarily grows wheat, barley, and flowers.

San Isidro is the second most-visited tourist attraction in the municipality of Sacaba, with the first being the Cretaceous Park which receives 5,000 visitors a week. Third is the Metropolitan Park.

Due to the success of the Cretaceous Park, the Mayor’s Office decided to expand it with new spaces for the “Ice Age” and the “Quaternary Era” over 4 hectares of land in front of the current park.