Sisi, an eighteen-year-old patient, was taken home to San Lorenzo, in the Bolivian department of Beni, this morning after undergoing a year-long ordeal with a cancerous tumor in her head. The tumor first appeared near the back of her head in May 2011, but was at first a painless obtrusion. Sisi was in her first year in college in Trinidad last fall when the tumor became too large and too painful and she was forced to stop studying.

Doctors in Santa Cruz operated on her in January, and she spent two months in the hospital undergoing intensive radiotherapy. In March, however, it was discovered that the tumor had returned. Sisi and her mother were flown by Mano a Mano to Cochabamba to get further treatment. 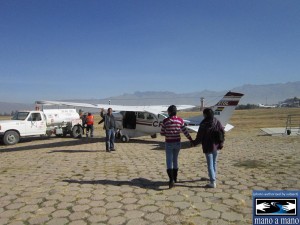 Sisi being transported in the Mano a Mano plane

After surgeries to remove the mass, seven weeks of chemotherapy, and two more months away from home, Sisi has been determined cancer-free. She is returning home with oral chemotherapy medication to take for the next three months. “Thanks to Mano a Mano, who has been helping us so much,” said Sisi’s mother, who has been by her side throughout the healing process. “I am always praying for Mano a Mano so that they can keep helping people who need it. It’s very important, because before there was nothing like this.” The first thing they will do upon arriving home? “Kill a few chickens and celebrate with the family,” said Sisi. 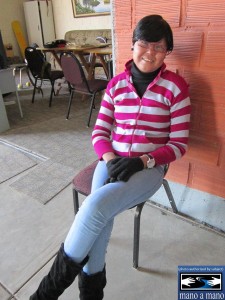