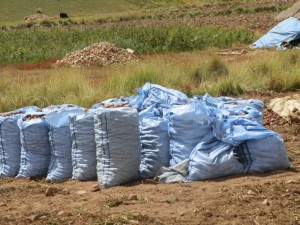 Last week Mano a Mano staff was visiting our newly-completed water reservoir project in Sancayani. While there we met with the family of don Tomas Rojas, a Sancayani resident and former president of the Irrigation System Group for the community.

Tomas was busy harvesting potatoes with his family. His first crop this year was only watered with rain water, but for the next harvest he will have access to water from the water reservoir that was completed in March 2012 and will be able to produce many more crops. 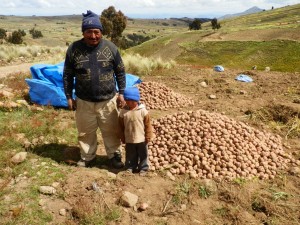 Tomas harvesting potatoes with his grandson

Why Build a Water Project?

Over 3,000,000 of Bolivia’s 9,000,000 citizens live in rural areas. The vast majority of rural residents eke out a meager living as subsistence farmers, raising crops and a few domestic animals on one–two acre plots, earning an average income of $200 – $300 yearly – less than $1.00 per day.  The Cochabamba Valley (where Sancayani is located) essentially has two climatic seasons: a warm, rainy season during which rain falls nearly every day for three to four months, and a cooler dry season during the remaining months when moisture rarely falls. Lack of water during most of the year results in widespread failure of crops to mature and substantially reduces yields. In contrast, during seasons of heavy rains the fields flood, washing away germinating seeds and spouting plants. Together, these problematic circumstances result in failure to meet the nutritional needs of the local farm families and make it nearly impossible for them to improve their standard of living.

Beginning in 1950, Sancayani farmers attempted to use their picks and shovels to dig a channel along the side of their mountain, hoping to direct spring water and snow melt to the land they cultivated, and thus increase their crop yields. Unfortunately, the area closest to them was filled with rock which they could not penetrate with hand tools. After numerous failures and a nearly disastrous landslide, they concluded that lack of engineering expertise and heavy machinery that could safely dig and stabilize the terrain would force them to abandon their dream of having sufficient water to raise crops to feed their families and sell produce in urban markets. Their Valle Alto neighbors told Mano a Mano  staff that they had been they had been trying for 15 years to find a means to channel the abundant, high mountain spring water into the river so they could have water during the dry season. When these subsistence farmers heard that Mano a Mano had begun to build water reservoirs, they approached staff of Mano a Mano  with a plea for help in constructing reservoirs and channels. “Water is life”, they said. “Without water we cannot live”.

Building water projects is hard work; these reservoirs take years and thousands of hours of collaborative efforts by the community, local government, and Mano a Mano staff. The Sancayani project was particularly difficult due to its location (it is more than 14,000 feet above sea level in the Andes Mountains, with constant fog, mud, and sub-freezing temperatures).

The Sancayani water reservoir was dedicated in March 2012 and will begin to provide water to more than 20,000 Bolivians!

Impact of a Water Project

Once they are complete, farmers are able to improve crop harvests by having improved access to water, which can in turn improve incomes and diets for the families.

The difference water makes; corn on the left had water from a Mano a Mano reservoir, the corn on the right did not

We are excited that as part of the Sancayani water project, Mano a Mano has collaborated with the University of Minnesota and is working on research to better measure the impact of our water projects! As the initial phase, last summer three graduate students from the Humphrey School Masters in Development Practice program traveled to Bolivia and completed a baseline survey for Sancayani as part of their research. We are planning to work together with University faculty and students, along with the community of Sancayani and Mano a Mano staff, over the next academic year to get feedback from Sancayani residents that will allow us to better meet their needs.