We recently received this note from Ivo Velasquez, Project Director for Mano a Mano Nuevo Mundo, about two of our water projects:

Laguna Sulty is located in the Valle Alto, a section of the department of Cochabamba that has more than 30,000 hectares (1 hectare=10,000 square meters or 2.47 acres) of good land capable of growing crops but almost no water to irrigate it. Mano a Mano buiilt the Laguna Sulty water reservoir after a request from the community. The project was dedicated on January 5, 2008 after a very difficult and challenging 7 months of construction (Mano a Mano Bolivia also constructed a health clinic in Laguna Sulty in 2006).

The reservoir has filled with water every year since its dedication, mainly during the rainy season between November and March. Community members irrigate and harvest corn, which is said to be the best corn in the area. After the end of the rainy season in March, water is retained in the reservoir to be able to irrigate a second harvest, usually in July, when families either plant a second crop of corn or alfalfa for their animals. 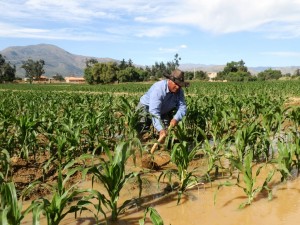 Over the past few years the farmers have found that irrigating their corn with just a small amount of water from the reservoir, along with any rains that may come, almost guarantees them a good harvest.

Many in the community had given up hope of ever having water; a typical farmers’ harvests were maybe 20% if they were able to grow anything at all. Now with water from the reservoir they have good harvests, and enough food for their families and enough surplus to sell at the market. The reservoir has also improved the climate in the area; the additional water in the reservoir has increased water levels in the subsoil which has increased the humidity.

Even though the reservoir has greatly improved water access in the area, it still isn’t sufficient to irrigate all 540 hectares of land for the 350 families that live there. Everyone has to irrigate according to a schedule and receives a defined amount of water. A survey indicated that right now only half of the land is being irrigated; families have to share with their neighbors to ensure that everyone is able to irrigate at least some portion of their land. But it is a drastic improvement from before.

Laguna Sulty used to be an area that had some of the worst harvests and had almost no access to water, but they now have water and are able to produce good harvests.

On August 13, leaders from 10 communities in the Laguna Sulty area traveled to the Mano a Mano Nuevo Mundo office in Cochabamba. Don Primitivo Montano, a former community leader, told us that they had never had a better corn harvest than this year, and everyone in the group expressed their deep appreciation for the water project. The group also came to request new water projects to be able to provide water to lands that were further away and higher in elevation. 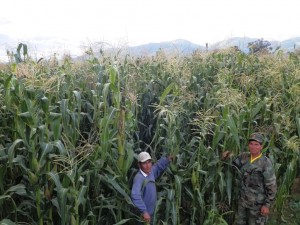 We are now working on a water reservoir in Jusku Molle, a 5-minute drive from Laguna Sulty. Both of these projects are using a pump system that, according to some engineers, is one of the first of its kind in Bolivia (this pump system has been working very well since 2008 in the Laguna Sulty reservoir). 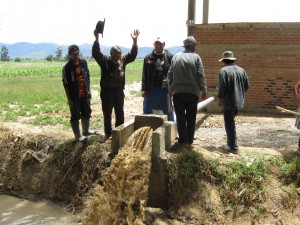 The pump system in action in Laguna Sulty

Last week we visited the Jusku Molle site with Cochabamba Rotary Club members, and when we arrived an older man some distance away saw us and ran as fast as he could, kicking up dirt and almost falling over on his way to make sure he got to us before we left. “Thank you for the projects that you are doing in my community, now we will have water and food, thank you Mano a Mano,” he told us in Quechua with a smile on his face. This is something we see on the faces of Laguna Sulty residents now; there is happiness, a level of excitement and hope for their future.

For us, it is a joy to be able to work in this community and provide a water project that has been very successful, and we are able to see the results when we visit.  All this is made possible thanks to the effort and support of our friends from Rotary, volunteers, donors, and Mano a Mano in Bolivia and in the US.